Team CardsChat Represents in WSOP Little One for One Drop
July 7, 2014 CardsChat Community

Team CardsChat Represents in WSOP Little One for One Drop 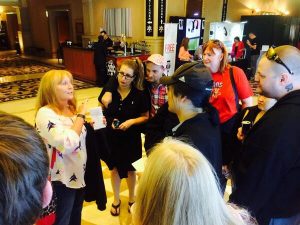 CardsChat did something unique at the 2014 World Series of Poker this year. The popular forum gathered a group of players planning to play the $1,111 No Limit Hold’em Little One for One Drop event as a team. While still competing against each other and the rest of the field, all represented CardsChat with their signature hoodies and charity and rake portions of initial buy-ins paid. With a Twitter and CardsChat forum presence online and excitement for the tournament, the 16-player team gathered in Las Vegas for some poker.

An added incentive for the players was a last-longer promotion, which offered the remainder of the buy-in (worth $889) paid for the player who lasted the longest in the Little One for One Drop.

All of the team members had fun, not only in the tournament, but getting to know their fellow players and meeting some famous people in poker.

Excitement from the Start

The 16 CardsChat team members were as follows, with their CardsChat screen names in parentheses:

Ryan Laplante even went further than expected and promised to donate any proceeds from his CardsChat sponsorship to charity. He also planned to reenter several times in an attempt for a deep run.

Kristin Ting played in honor of Chad Brown, longtime professional poker player who succumbed to a tough battle with cancer. “Today, I’m going to play with passion, courage, conviction, and strength,” she wrote on Twitter. For you, my friend @DowntownChad. May you now rest…”

Chris Baud spent some time talking strategy with one of the stars of the 2014 WSOP, Melissa Burr. “Pretty sure I’ll win everything now,” he wrote on Twitter.

Nancy Birnbaum and Lisa Nichols shared some photos taken with their favorite poker players, as Nancy tweeted a photo with Jennifer Tilly and another with Allen Kessler. Lisa took a great shot with Maria Ho and Lynn Gilmartin. Kristin Ting and Rex Clinkscales got in on the action as well, tweeting a picture with WSOP Tournament Director Jack Effel, and Ting snapped a photo with Antonio Esfandiari. Chris Baud and Elbert Pruitt each took a picture with Lynn Gilmartin.

Players like Matt Vaughan were able to see some of their favorite players for the first time at the WSOP, as he “made brief eye contact” with Barry Greenstein and tweeted, “Star struck!”

Team CardsChat had a rough time with relatively small starting stacks and a field full of players, many of whom were ready to reenter and play a little looser at the start. Most of the players exited on the first day, and the majority of the team failed to make the money portion of the tournament.

Two players did make the money, however. Nancy Birnbaum made it to 416th place from the big field for $1,780 in cash, while Chris Baud went deeper and finished in 275th place for $2,630. Baud could have taken the last-longer money of $889 for himself, but he and Birnbaum decided to chop it in the spirit of the team.

Ultimately, Team CardsChat had an exciting time at the World Series of Poker. Some, like Birnbaum and Laplante, will continue on and are playing in the Main Event. Others took in some side events and satellites during their stay in Las Vegas.

We wish all of them the best in their poker endeavors, whether in the WSOP Main Event or small local tournaments. Thanks to everyone for representing Team CardsChat so well! And we look forward to seeing you in the poker forums on CardsChat, which Birnbaum called the “friendliest online poker forum, guaranteed to improve your poker game dramatically!!”

very nice event for Cardschat!
and congrats to the cashier!