The World Series of Poker is about to get underway, and here at CardsChat, we’re excited to unleash our own forum members on the Rio in Las Vegas. The third annual WSOP Colossus, a $565 buy-in tournament beginning on June 2, will have 19 CardsChatters vying for the $1 million guaranteed first place prize. 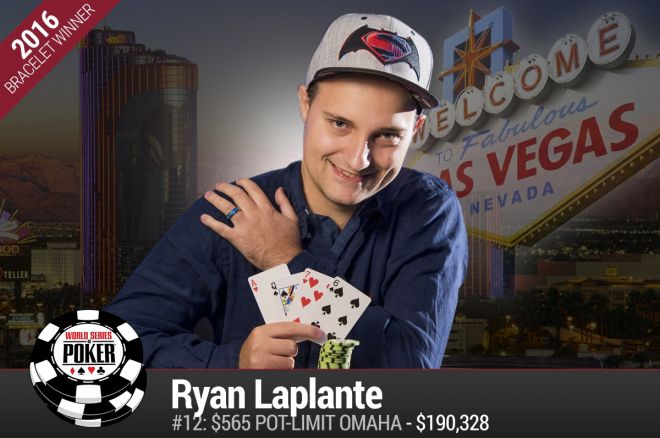 WSOP 2016 bracelet winner Ryan Laplante will be among 19 players from CardsChat in this year’s Colossus III. (Image: WSOP)

The team includes 2016 bracelet winner Ryan Laplante. The Minnesota native has nearly $1 million in career live tournament winnings and had a memorable summer last year, having cashed in a staggering 12 events.

Laplante won his first career bracelet last year in the $565 buy-in Pot-Limit Omaha championship, picking up a $190,328 payday, the biggest of his career.

He also had one of the most heartfelt, emotional post-victory speeches in WSOP history. A day after the tragic mass shooting at an Orlando gay nightclub, Laplante, an openly gay poker player, tearfully said, “I am so proud to call myself a World Series of Poker champion,” as he honored the victims.

The poker champion will attempt to repeat his 2016 WSOP performance. Or, at the very least, win the CardsChat last-longer prize in the Colossus.

Yours truly will also be representing CardsChat in the Colossus. It will be my third appearance in the event. I cashed in 2015, my first WSOP event.

I’ll be joined by 18 other players, including Debi O’Neill, a recreational player from Georgia. You may know her as ‘dakota-xx’ on our forum, where she is the administrator.

“We are looking forward to this year’s event and have a great team representing CardsChat and it will be an exciting race to see who lasts the longest. We will most likely be chasing Ryan Laplante who had an amazing year last year!,” she said.

Along with Laplante, another stellar CardsChat team member with a strong record will be the also-returning Rex Clinkscales. He has more than $1 million in career winnings, including a 17th place finish at the PokerStars Championship Main Event in the Bahamas this past January.

Joe Mussat joins the group. If he runs as hot as he did in the Colossus last year, he’ll take down the last-longer prize. He won $8,193 in this event in 2016. Mussat has been a CardsChat member since 2008, as has Matt Vaughan. But they aren’t our longest tenured members on the team. Donna Scruggs has posted on the forum since 2007.

Colossus III will likely become one of the top-three largest live poker tournaments in history. In 2015, the event set a record for the most entries with 22,374. Last year’s tournament had 21,613, the second largest field ever.

The Colossus is a five-day event with $1 million guaranteed for the winner, which I plan to collect. To steal a line from legendary trash talker Larry Bird at an NBA All-Star Game Three-Point Shooting contest: “Who’s playing for second?”

Haha awesome. I wish good luck to all you guys playing 🙂 Blessings