Donald Trump might be playing a very tough hand these days, being in the heads up game of his life with one week to go till the 2016 presidential election plays out at last, but there was once a time when his Atlantic City venue was the place to grind on the East Coast. 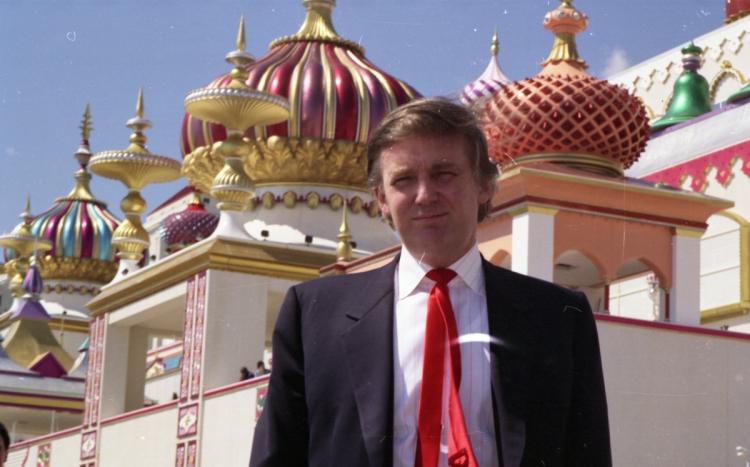 Donald Trump and the Taj Mahal poker room: back in the day, Trump’s room was all the rage in Atlantic City. Now, it awaits a possible connection to political history. (Image: Robert Rosamilio/nydailynews.com/ )

The Trump Taj Mahal casino ultimately became embroiled in business disputes and politics before its final breath earlier this month, but one thing that won’t get lost in the mire is the quality of its poker room. Reflecting on the passing of Atlantic City’s most iconic poker room, syndicated poker columnist Chuck Blount recently described its time in the spotlight as an “interesting ride.”

Place Where Legends Were Made

Harking back to the days when New York was awash with underground poker rooms like the Mayfair Club where Erik Seidel et al got their start, the Taj poker room was a break from the norm. Offering a legal place for grinders to play, the room saw New Yorkers make the short trip to the Taj almost every weekend to “skin” the tourists, according to Blount.

Among those finding an adopted home in the poker room was co-writer of the cult poker movie Rounders, Brian Koppelman.

“If you were someone who wanted to hustle people, you could go there and find tourists to hustle,” Koppelman once told the Associated Press.

In fact, such was the reputation of the Taj poker room that it featured heavily in Rounders, Blount reminds us. Not only that, but at a time when poker was yet to experience a boom, it launched the US Poker Championship.

First played in 1996, that event was the only one of its kind to match the WSOP Main Event and even offered a $500,000 top prize until it came to an end in 2010. Of course, that type of buy-in and prize isn’t anything remarkable by today’s standards, but at a time when poker was being pushed to the back of the casino floor, it was a welcome oasis of plenty for US players.

Hard Times as the Taj Hits the Skids

Unfortunately, with competing states starting to sap the bankroll of Atlantic City, the Taj started to lose revenue and, in 2014, it filed for bankruptcy. With Trump and Trump Entertainment looking for a way out, the casino started to hemorrhage money and by November of 2014 the company officially closed it down.

In a bid to keep the casino and its iconic poker room open, billionaire and friend of Donald Trump, Carl Icahn, stepped in with some cash. Initially injecting $20 million into the venue to keep it afloat, Icahn then forged a deal with Trump Enterprises in 2016 and planned to spend $100 million to rejuvenate the casino.

Unfortunately, disputes with the workers union, UNITE HERE, blighted Icahn’s regeneration plans, as did a $10 million fine for historical instances of money laundering when the Taj was under the control of Trump Entertainment. Eventually, with an estimated $350 million flowing down the drain over several years, Icahn closed down the casino in October and left almost 3,000 employees out of work.

Although the closure of the Atlantic City casino was far from pretty, commentators like Blount are around to stress the importance of its poker room. At a time when the game was on the slide and East Coast residents were struggling to find a game, the Taj offered an impressive place to play and it’s this that many feel it should be remembered for.

And if Trump should beat the odds and take the White House come next week, a possibility that seems slightly more possible after a plethora of scandals and a reopened FBI probe surrounded the Clinton campaign this week, then the Taj’s old poker room will always be connected to history, albeit in a “six-degrees-of-separation” kind of way.

even though its all just a song and dance and the big picture wont change, i would still want donald to win over shillery

of course, who doesn’t?

Some Casinos in England to Reopen but Regional Lockdowns Return