On Day One of the $300,000 buy-in Super High Roller Bowl at the Aria, comedian Kevin Hart tried to keep the TV table laughing. In his Las Vegas debut as an official PokerStars representative, he also played some rather solid poker. 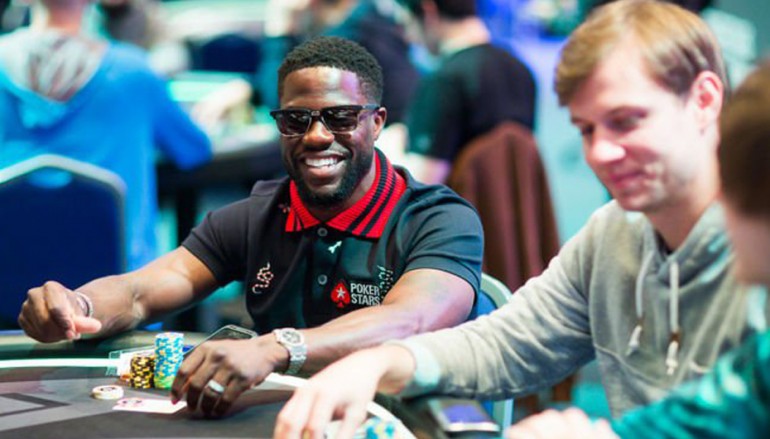 Kevin Hart did what he does best on Day One at the 2017 Super High Roller Bowl; kept everyone in good humor. (Image: pokerbrave.com)

When play resumes on Monday, Hart will start Day Two in the middle of the pack, in 27th chip position out of 44 players remaining, one spot behind Daniel Negreanu.

With $6 million guaranteed for the winner, this no-limit hold’em tournament is no joke. The actor was mostly passive on Sunday, but occasionally mixed in a bluff. He often limped with strong hands and laid down a few hands when action folded to him on the button instead of making a standard raise.

Hart spent much of the day trying to liven up the table with his banter more so than his betting. But most were more interested in focusing on the task at hand. Many of Hart’s quips were mere smirks or painfully forced laughter. Hart may be trying to “make poker fun again,” but even for super-high-stakes players, a $300,000 buy-in is serious business.

Byron Kaverman, 2015 GPI Player of the Year, finished the first day with the chip lead with 1.25 million in chips. 7,000. Leon Tsoukernick from the Czech Republic is second in chips with 912,000, with Fedor Holz right behind him with 803,000. Holz finished runner-up in this event last year.

Lauren Roberts is the lone woman alive in the tourney, with 99,000. Isaac Haxton and Tom Marchese are sitting on short stacks, with 62,000 and 59,000 respectively.

Also making a notable return to the Las Vegas felts was Tony Guoga, who has been relatively inactive at the poker table in recent years while pursuing politics in his home country of Lithuania. No an outspoken member of European Parliament, Tony G will start Day Two with 372,500 chips.

Among the early eliminations who will not be back are Haralabos Voulgaris, who was the first player out, and John Juanda, who was the second.  Erik Seidel’s tournament also came to an early end, as did Phil Hellmuth’s.

Slow Roll of the Day

Hellmuth arrived more than two hours late and never got much going, though he would see one of the sickest coolers of the day, in a hand with funnyman Hart and future chip leader Kaverman.

The flop came out Q♣8♦3♠, making it highly unlikely for Hellmuth, or any player in that situation, to avoid going broke. All three players checked with the pot at 24,000.

The 10♥ made for an interesting turn card. It gave Kaverman some hope with a gutshot straight draw. He checked. Hellmuth then bet 10,000. Hart and Kaverman quietly called.

Kaverman wasn’t a believer in Hart, so he popped it to 32,000. Hellmuth had an easy decision to shove all-in for 70,000. Hart then re-shoved and got Kaverman off the hand.

Hellmuth showed his hand and it took Hart about five seconds before flipping his cards over. The Poker Brat, surprisingly, didn’t flip out over the slow-ish roll, though fans can wonder if he would’ve treated a non-Hollywood celeb the same way.

In need of the miracle case-trey to stay alive, the 14-time WSOP bracelet winner wasn’t so lucky when the 10♠ landed on the river, ending Hellmuth’s 2017 Super High Roller Bowl quickly.

When play resumes on Monday, blinds will be at 1,500/3,000 with a 300 ante. Poker Central aired Day One live on a 30-minute delay for free on Facebook and the new PokerGO app. Viewers will have to pay to watch Day Two and beyond.