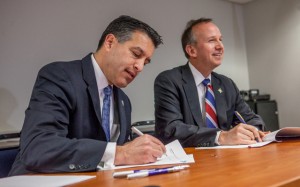 It has been one month since Nevada and Delaware reached an agreement and signed a pact to share online poker liquidity. Since then, the process of moving toward shared player pools has been expedited, with the new launch date set for the summer of 2014 by Nevada Governor Brian Sandoval.

Initially, Delaware’s Finance Secretary Tom Cook indicated that the two states would take as much time as needed to perfect the partnership before any type of official launch. He predicted a 2014 launch, but pointed towards the end of the year. But with both states in dire need of more revenue from their respective online poker sites, the news of quicker movement fits with the desire of Nevada and Delaware to expand the opportunity for increased prize pools and greater potential revenue.

Sandoval recently spoke at the iGaming North America conference at Planet Hollywood in Las Vegas. His speech revealed that he believes the Nevada/Delaware partnership will be ready by the summer of 2014. He told reporters that the confidence in a quick launch for the project will show other states that it is possible to accomplish the liquidity in a reasonable time frame. “I trust the regulatory process we have,” he said. “We vetted this with Delaware for several months and we’re currently building the platform.”

His hopes that his confidence in the partnership will encourage states like New Jersey to join. Sandoval has met with New Jersey Governor Chris Christie about sharing liquidity, though there are no new developments with regard to moving forward. Sandoval also hopes it will encourage other states to enact positive online poker legislation to regulate within their states and subsequently join Nevada and Delaware in a shared player pool.

The Governor even suggested, “If there are states that don’t have as sophisticated a regulatory structure as we have, that’s something we can offer. If your state doesn’t have the infrastructure, use our capabilities.”

The deal between Nevada and Delaware was announced on February 25. The Multi-State Internet Gaming Agreement would allow the states to share online poker to increase payouts for players and create a model for other states. The landmark deal was signed in front of cameras, and Governors Sandoval and Delaware’s Jack Markell smiled and spoke to the press about their excitement of merging today’s technology and gaming to launch new economic opportunities for both states.

It was public knowledge that each state had trouble attracting enough players to make the online poker endeavors truly profitable, and the joining of the states sought to benefit sites like WSOP.com and UltimatePoker.com, as well as the 888-powered sites in Delaware.  888 Holdings CEO Brian Mattingley was excited at the time to work with regulators and increase the network in the states.

“It gives the smaller states much more liquidity,” he said at the time, adding, “I can only assume the governors will reach out to other states in order to increase the network.”

The agreement put into motion the Multi-State Internet Gaming Association (MSIGA), which would set the regulations for interstate online poker and set the standards and guidelines for the first partnership of its kind. With Sandoval’s recent statement about a summer 2014 launch, MSIGA must be progressing and may soon reveal its list of regulations for this new part of the online gaming industry.