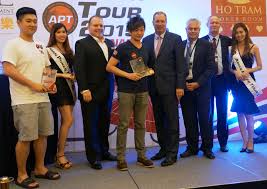 The first major poker festival to be held in Vietnam was a huge success and sign that Asian poker is on the up. (Image: somuchpoker.com)

Poker industry insiders have long lamented over where the next poker boom will occur and for the past few years the frontrunners in the debate have been India and Asia.

Offering huge potential in terms of their overall populations, both markets have tentatively embraced the game, yet neither has fully latched onto it in a big way.

However, all that seems to be changing on at least one continent.

Thanks in part, to the notorious high stakes cash games in Macau, Asia is now an emerging hotbed of poker action with tournaments and players popping up in a variety of locations.

One of the latest countries to “pop” in terms of poker participation is Vietnam.

Although still something of a minnow in global terms, the country recently hosted an Asian Poker Tour (APT) event and enjoyed a huge amount of success.

According to a review by World Gaming Mag, APT Vietnam was “hugely successful” for a number of reasons.

Despite being an untested market and a tricky destination to reach for many players, the inaugural live poker event in Vietnam attracted more than 110 unique players from 36 different countries.

For poker players used to attending events with thousands of runners, the fact the festival’s 15 events courted a total of 822 buy-ins won’t seem that remarkable.

However, what the tournaments lacked in participation they made up for in diversity.

According to the list of results, APT Vietnam winners came from countries as far flung as England, Norway, Finland and South Africa (the winner of the Main Event, Kwan Kit Kwok, was from Hong Kong).

Helping to bolster this smorgasbord of nations was a sprinkling of American talent such as WPT champion, Nam Lee.

Despite born in the US, Lee’s roots are undeniably Asian and his journey to Ho Tram for the APT event was not only a tick on his personal bucket list, but a profile boost for the festival as a whole.

Although in an interview Lee admitted that it wasn’t an easy destination to get to, he did suggest that Vietnam was “like Las Vegas” and a relaxing place to play poker.

One of the main reasons why Vietnam, moreover Asia, is being seen as the new “go-to” place for poker players is the recent success of native players on the world stage.

In addition to a number of American-born Asians, such as Lee, claiming titles at major events, more locals are now anteing up against international stars.

In fact, already at this year’s World Series of Poker (WSOP) a number of Asians have made it deep into the money.

Naturally, success breeds success and, as more native Asians go deep at the WSOP, the chances of countries such as Vietnam enjoying a poker boom increase.

Although it’s too early to suggest that the latest APT event in Vietnam is the start of something big, it’s certainly a positive sign that poker is finding its feet in more countries across Asia and that can only be a good thing for the industry as a whole.