Contrary to popular belief, “white magic” is alive and well. Phil Hellmuth extended his WSOP bracelet record to 15 on Wednesday, thanks in large part to some timely suckouts heads-up against Steven Wolansky in the $5,000 No-Limit Hold’em event. 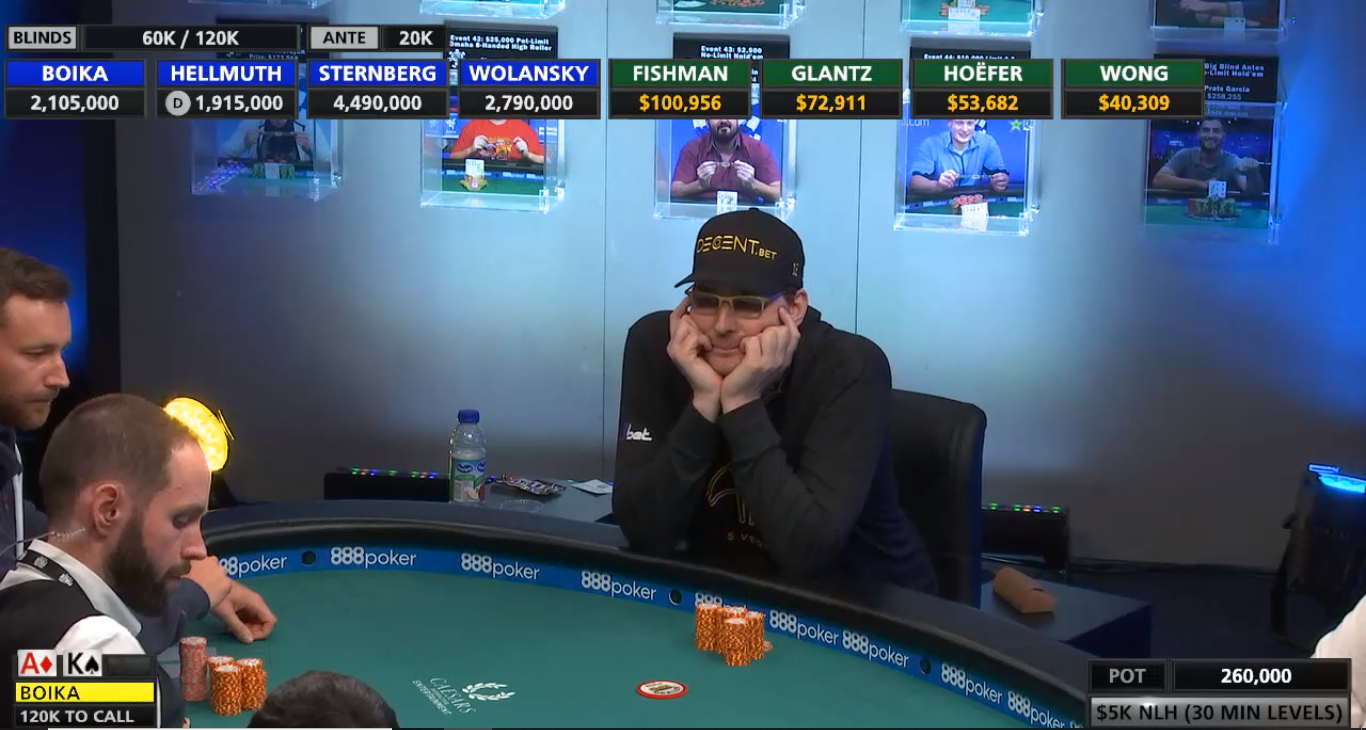 It had been three years since the Poker Brat last won a bracelet, hardly reason for concern if we’re talking about anyone else. But for Hellmuth, whose game is frequently criticized by those who must think winning 15 bracelets is a piece of cake, three years probably seemed like an eternity.

The event Hellmuth won Wednesday was one of 13 bracelet tournaments to start after the Main Event, a scheduling feature that hadn’t been tried at the World Series of Poker for nearly a decade.

Just days before, Hellmuth was taking serious heat on social media for antics that potentially influenced another player’s decision during a hand on Day 2 of the Main Event. People were calling for WSOP officials to give him a penalty retroactively after he unleashed an obscenity-laced tirade in the middle of a hand, out of turn, in a way that influenced another player’s action, arguably causing the target of his poker ire to bust short of the money bubble.

Phil apparently felt bad, wallowing in bed by his own account before showing up late for Day 3. In a make-good effort, the author of a book about mental fitness called “#Positivity” promised to buy James Campbell in to next year’s Main Event.

@JCamby33 I lost some sleep over my outburst. I believe you lose the hand anyway, but maybe I am wrong. You handled yourself well, and played well. As a gesture of goodwill, and because I respect policeman and firefighters: I’m going to buy you into 2019 $10,000 @WSOP Main Event

(Campbell confirms that Hellmuth has already delivered on his promise.)

It sure seemed like it Wednesday night, as Hellmuth twice got his money all-in pre-flop against Wolansky as a heavy underdog and won, and then finished his opponent off by winning a race.

Hellmuth was on his best behavior at the $5k final table, and it was his day.

Hellmuth won his 15th bracelet by playing his usual unconventional style of play — “white magic,” he calls it. He often led out with a bet from out of position with middling pairs, a play that GTO-centric players frown upon.

“From a fundamental standpoint, if you study the math of the game, it’s easy to see the leaks in Hellmuth’s game,” Twitch commentator David Tuchman said during Wednesday’s broadcast. “But you can’t ignore the results.”

Mike Matusow, whose 2018 WSOP ended abruptly last week due to an illness, had a message for those who are critical of the Poker Brat.

Is-not that @phil_hellmuth won his 15th that is impressive it's that he keeps winning every 3 yrs and no matter how good wizards get he keeps winning and all they do is disrespect and tell him how bad he is which is disgraceful. Maybe they should see all the good things he does

Prior to the $5k NLH event, Hellmuth had a forgettable summer. He had less than $30,000 in cashes and no deep runs before finally getting over the hump to scoop a bracelet and $485,082, which makes up for the many times he swung and missed at the 2018 WSOP.

“After this f*cking summer. I never did anything this summer,” Hellmuth shouted to his rail after finishing off Wolansky.

Matusow wasn’t the only big personality in poker standing up for Hellmuth on Twitter following Wednesday’s big victory.

Wow. I’m in the Ukraine sweating @phil_hellmuth on Twitch. Can’t believe it. Bracelet 15! Love you bro. But they’ll still be doubting you when you got 20. You’re amazing. Congrats! #brokerecords

I believe in white magic #wsop

Hellmuth now has a five-bracelet lead over Phil Ivey, Johnny Chan, and Doyle Brunson on the all-time records list. But the Poker Brat still has work to do to achieve his ultimate goal.

“In 1993, I said I’m going to win 24 bracelets,” Hellmuth said during ESPN’s Main Event broadcast after polishing off his 15th bracelet.

Achieving that goal might seem unlikely, if not impossible, but this is Phil Hellmuth we’re talking about. Never doubt “white magic.”

lol at those who think no limit poker is a science…. it is 100% an art and all the math in the world will not stop the white magic!

Keep on dodging those bullets my brother!!

Awesome! 15 bracelets is a record that only true haters would besmirch!