On this day in 1998, controversial poker legend Stu Ungar died of a drug overdose. As Doyle Brunson once said, “everybody felt terrible, but it wasn’t a surprise.”

Dubbed “The Comeback Kid,” Stu had a serious drug addiction that inevitably took his life. He was also one of the great tournament players of his era, so we’ll look back on the life of the three-time WSOP Main Event champion. 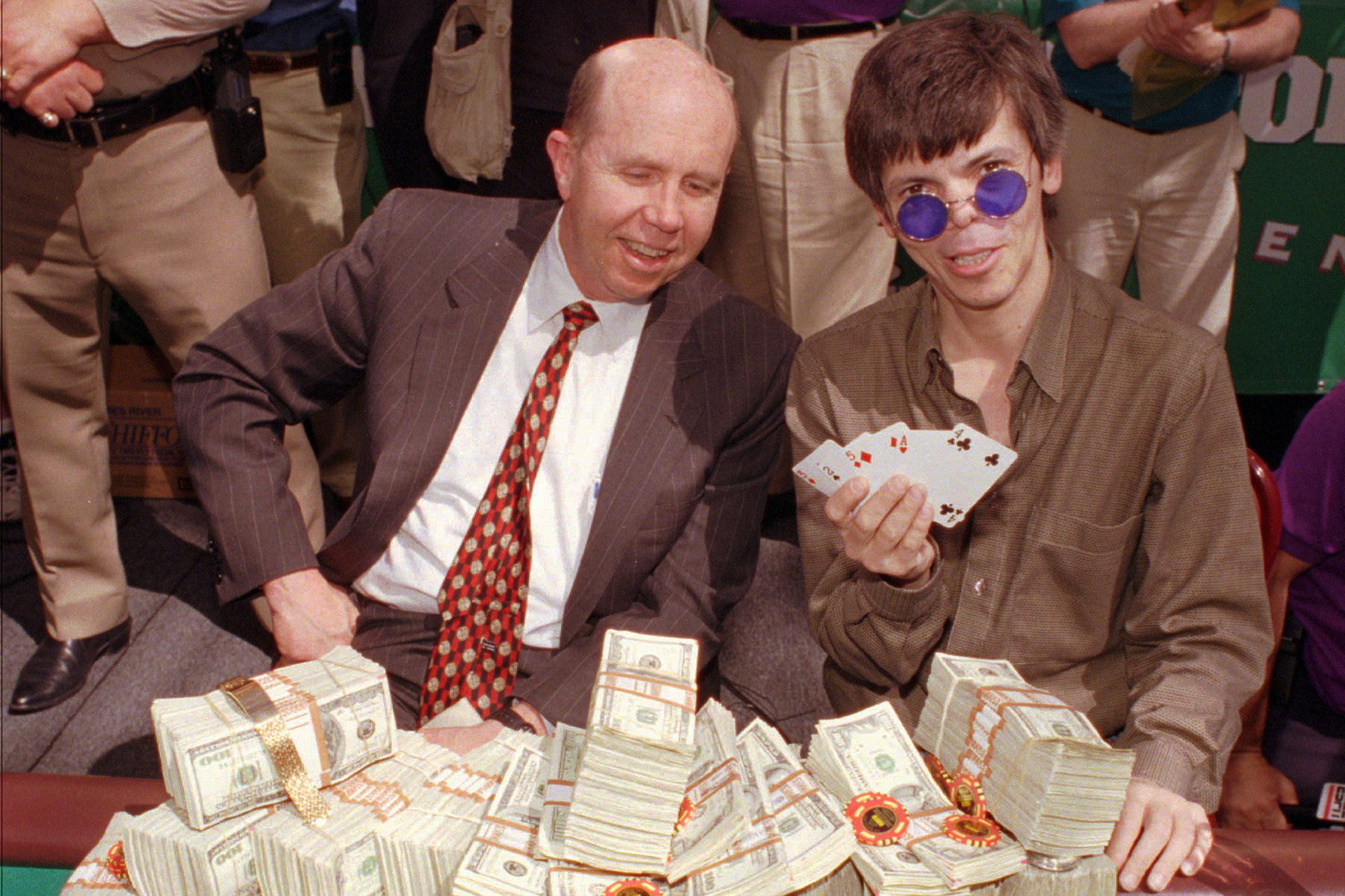 Stu was just 45-years-old when he was found dead at the Oasis Motel on the Las Vegas Strip. Low on cash and down on his luck, he checked into the $48-per-night hotel two days prior. Just 18 months earlier, however, he hit the ultimate high, and it wasn’t one that involved illegal drugs.

Ungar won the 1997 WSOP Main Event for $1 million, and it was a huge surprise to the poker community. Sure, he was arguably the best tournament player in the pre-poker boom era, but he hadn’t won the tournament since 1981. His heavy drug addiction played a toll on his health and poker game in the years leading up to that event.

In fact, Ungar hadn’t even cashed in a WSOP event since 1991, before becoming world champion for the third time. His luck was about to turn around, however.

Unfortunately, for “Stuey,” the good luck was short lived, and it was all downhill from there.

Who Was Stu Ungar?

Sadly, although probably deservedly, Ungar will always be remembered as much for his poor behavior on and away from the felt as he was for his prowess at the poker table. When the cards were in the air, at least in tournaments, he was an absolute beast, and one of the most feared players of his generation.

Stuart Errol Ungar was born in Manhattan, New York on Sept. 8, 1953. His father, Ido, was a bookmaker while he was growing up, so there was little surprise Stu had developed the gambling itch himself.

Ido operated an illegal casino out of a bar he owned in New York, and it was here that the younger Ungar was exposed to gambling long before he became of the legal age.

Ungar befriended organized crime figure and skilled poker player, Victor Romano when he was still a teenager. Romano served as a mentor and friend to the young, aspiring gambler.

By 1980, Ungar was among the top poker players in the world. He won the WSOP Main Event that year at age 26, becoming the youngest world champion at the time. A year later, he won poker’s biggest event again.

Ungar always had a knack for skill games, even as a young kid. At age 10, “Stuey” won a local gin tournament. He dropped out of high school in the 1960’s after his father passed away to support his family by playing gin.

By the late 1970’s, his reputation in the game was so strong that the action had dried up. No one wanted to play him. He was the Mike Postle of gin, except he wasn’t cheating. He was just that good.

The future poker champion needed another way to make money, but he wasn’t cut out for a typical 9-5 desk job. He required a career path that involved taking risks and using his game-playing skills. Naturally, poker was the perfect fit, and, like gin, he quickly mastered the game.

Ungar won the 1980, 1981, and 1997 WSOP Main Events, along with two additional World Series of Poker tournaments. He recorded nearly $4 million in career cashes that we know of, which might not seem all that impressive to a younger player today. You have to understand, however, that there were far fewer tournaments and players back in the 1980’s. Only a few pros back then had more than $1 million in cashes.

All the money in the world wasn’t enough to support Ungar’s drug habit, however. Late in his life, he was borrowing money to buy drugs. He was so broke at one point that he even needed his friend Mike Sexton to front him some cash, just so he could buy his daughter school clothes. It just goes to show that the saying “money doesn’t buy happiness” is true.

Although he was only 43 in 1997, and many of the legendary players at the time, such as Doyle Brunson were older and still competing at a high level, Ungar was essentially a has-been prior to that year’s Main Event.

He was so heavily involved in drugs that his poker game had slipped, and he was struggling financially due to his habits. Entering the 1997 world championship event, he hadn’t won anything meaningful in the previous five years. He’d earned his last bracelet in 1983, although he did have numerous wins in other events throughout the 1980’s and early 1990’s.

In the PokerGo biography on Stu Ungar, “Legends of the Game,” Poker Hall of Famer, Mori Eskandani said “none of us thought ‘Stuey’ could make a comeback. 1997 was truly an amazing performance.”

Ungar didn’t even have the money to compete in the Main Event that year. Billy Baxter, a seven-time bracelet winner, staked him the buy-in for a satellite, which he won, to earn his seat in the tournament.

“I didn’t think there was any chance (he could win),” Brunson said in the PokerGo biography. “It’s just a tribute to his greatness.”

Ungar was wearing down physically and mentally at that time. He had done so many heavy drugs for so many years that he was a shell of his old self. Still, he gathered himself together for a couple of days to defeat 312 of the best players in the world and win the Main Event for $1 million.

He finished off his heads-up opponent, John Strzemp, thanks to a fortunate river card.

Ungar’s life story had many chapters, some of which were positive and others negative. He was a respected player in terms of his skill level, but he was notorious for berating dealers when he lost a pot, and he was considered to be quite arrogant. Even his friend Mike Sexton said he didn’t like the way Ungar treated dealers.

He did, however, have some positive qualities as a human being that didn’t involve gambling talent. Ungar was considered generous with his friends, and he deeply cared about his daughter, Stefanie, who was 14 at the time of his death.

Ungar kept a photo of Stefanie with him during the 1997 Main Event. ESPN announcer Gabe Kaplan showed off that picture to viewers in Ungar’s post-game interview, asking the now three-time world champion if this would be the beginning of big things for him.

“Stuey, let me ask you a question,” Kaplan began. “I think I know you well enough to ask this question. In 1980 and 1981, you won the championship but you weren’t smart after that. Your life didn’t go 100-percent on the right course. Now you’re older, you’re wiser, you’re 43-years old. Do you think you’re going to do things differently now?”

It was evident from the champ’s answer that he wanted to change his life around, but also clear that he didn’t have the confidence he could fight off certain temptations.

“Well, I hope so, Gabe,” Ungar said, lacking confidence. “I’ve neglected my kid and I’ve done a lot of stupid things. But I want to tell you something for a fact. There’s nobody that ever beat me playing cards. The only one that ever beat me was myself and my bad habits.”

In the end, drugs beat Stu Ungar. The three-time WSOP Main Event champion passed away in Las Vegas on Nov. 22, 1998. Despite his flaws, he’ll always be remembered as one of the greatest poker players ever.

One of the best players of all time, which hurts that a player like stugar, is dead, maybe today he was one of the most important players and quein knows if he had a few titles of the maint event of the world poker championship