The 2022 WSOP Main Event is inching ever closer to a conclusion and, with just a few days of play left, we think it’s a good time to recap what’s already happened. 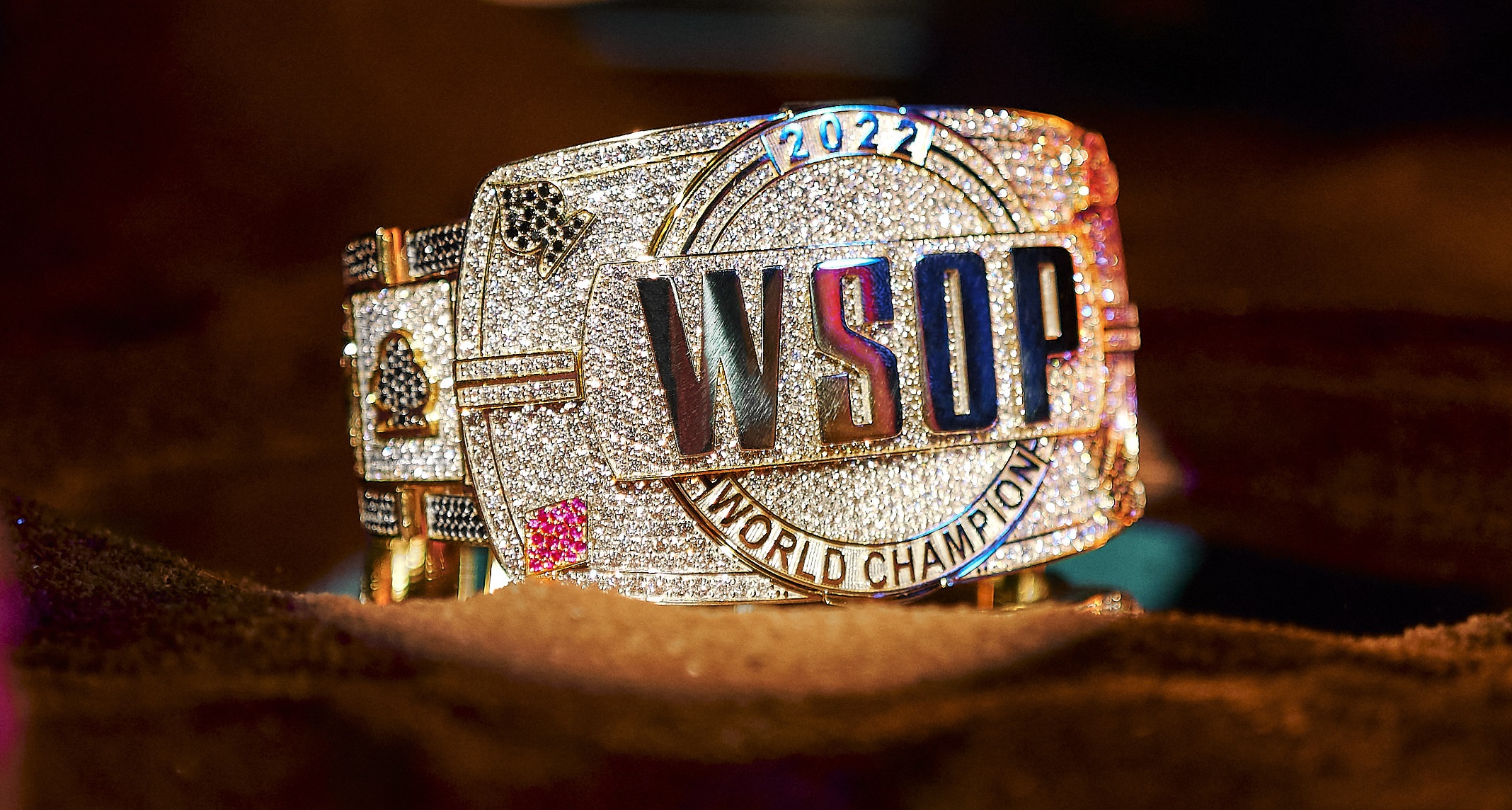 There have been some interesting Main Event moments on this year’s road to crowning a new champion. (Image: PokerGo)

Instead of looking back at exit hands and bad beats, we’re taking a sideways look at the action and some of the most interesting incidents from this year’s Main Event.

Perhaps the highlight of this year’s WSOP Main Event is the fact it now stands as the second largest of all time. The Big Dance has gotten bigger almost every year since Chris Moneymaker won in 2003.

The only exception to this rule is the 2006 WSOP Main Event, which still holds the record at 8,773. Barring that, and a few other anomalies, the $10K tournament has gradually increased in popularity and, this year, 8,663 players danced their way to the registration desk.

Is this the blingiest bracelet ever?

With the 2022 WSOP Main Event bigger than almost all before it, the decision to supersize this year’s bracelet seems justified.

The new WSOP Main Event bracelet in all of its glory. (Image: PokerGo)

The new piece of bling (pictured above) was unveiled ahead of Day 1D and, as you can see, it’s a darn sight bigger and bolder than Main Event bracelets of the past.

Phil Hellmuth thought the force would carry him through the WSOP Main Event or, at least, win him a few more fans. Unfortunately for him, neither happened.

Hellmuth’s annual tradition of turning up late to the Main Event dressed in an absurd outfit saw him enter the poker room as Darth Vadar this year. By his standards, the costume was fairly lackluster, but the response was anything but.

With the Main Event put on hold to ensure everyone was watching, a chorus of boos rang out across the gaming floor (see video above). To make matters worse, Hellmuth was out of the tournament within an hour.

Scotty Nguyen with a pocketful of chips

Scotty Nguyen is famous for saying, “you call and it’s gonna be all over, baby,” but his own bracelet run was almost over before it started. The 1998 Main Event champion reportedly mislaid his starting stack after registering late for the $10K tournament.

Wow hearing a very credible report that Scotty Nguyen late-reg'd, pocketed his starting chips and pretended he never got any chips. The matter is being escalated.

As tweeted by poker pro Shane Schleger, someone close to the action heard Nguyen ask for a fresh starting stack. The problem, however, is that the chips were actually in his pocket the whole time. Some reports claim Nguyen was drunk and simply forgot he’d collected the chips. Others, such as Schleger, think there might have been foul play involved.

Is Barstool bad for poker?

Barstool Sports, the irreverent digital media and sports company, sent a contingent of players to this year’s WSOP. Among the Stoolies anteing up in the Main Event were Adam “Smitty” Smith and Owen Roeder, who found himself in a confrontation with poker pro Allen Kessler.

Yes the @BarstoolNate guy called me a c@@t a moron and a liar and posted this, which obviously never happened. https://t.co/CjC2t0q9zm pic.twitter.com/4J1TfntvmW

Having the social media stars in attendance certainly generated some extra hype, but not all players were convinced their presence is good for the game. Kessler clearly had issues with Roeder and how a hand they played was reported.

Isaac Haxton was also on the fence. He tweeted that the Stoolies were people he’d definitely want in his game due to their lack of experience. However, he also said they’re the “last people” he’d want to hang around with, particularly at the poker table.

Mike Matusow has blown up in the WSOP Main Event before and, you’d better believe he’s not afraid to do it again. His most famous meltdown was in 2004 against Greg Raymer (see video below).

Well, as dramatic as that exit was, it might not be Matusow’s biggest Main Event meltdown anymore. The famously up-and-down poker pro made what the commentators described as a “suicide bluff” on Day 4.

With little fold equity due to the size of the chip stacks in play, Matusow made a stone-cold bluff into an opponent holding a flush.

Eventually, with a strong hand and 3:1 pot odds, Mikolaj Zawadzki made the call. That was the end of Matusow’s WSOP Main Event but, as you can see from the video above, he was philosophical in defeat.

Vanessa Kade was standing firm in the Main Event for a while before pocket kings sent her to the rail. As any player will tell you, exiting the Main is never a nice feeling, and is often the low point of a WSOP.

dropped my phone in the toilet at @wsop, that about sums up how my day’s going

As bad as she might have felt, things went from bad to worse for Kade soon after as she almost flushed her phone down the toilet soon after busting. In her words, the unfortunate incident pretty much sums up her luck at this year’s WSOP.