The legal team for Anthony Silva, the Stockton, California mayor accused of recording a drunken strip poker game with teenagers at a youth camp last summer, have released audio footage and photos of the alleged incident. 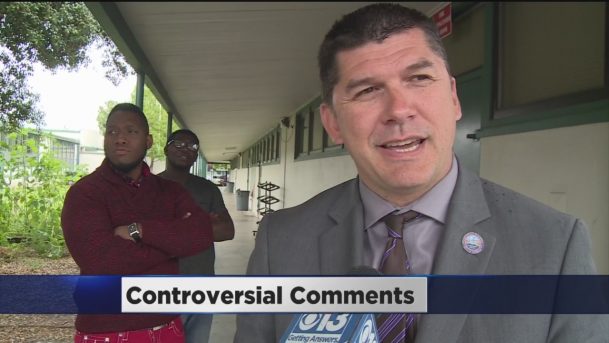 Silva, 41, was in court on Thursday to plead not guilty to one felony count of recording confidential communications, and three misdemeanor counts, including contributing to the delinquency of a minor and providing alcohol to minors.

Silva’s attorneys, Mark Reichel and Allen Sawyer, said they were releasing the tapes to show Silva’s side of the story. They allege that Silva “happened on a game that may have been strip poker,” and then left. They also say that witnesses have told them there were no minors in the room.

“As this will obviously be an ongoing legal battle, I can’t make too many comments about the case. However, I would like to make a few,” Silva said in a statement to the press. “Number one: Everyone there was 18 years old. Number two: I never, ever, ever, ever endangered a child. Ever. Number three: I never provided alcohol to anyone. And I certainly did not secretly record anyone.”

According to a news release by the DA’s office, prosecutors do have audio of a conversation that took place during the alleged strip poker game that indicates that all participants were naked. They believe one of the participants was a 16-year-old male. The clip also suggests that the participants are at first unaware of the recording and subsequently said they were unwilling to be recorded.

“Did you take a picture? Oh, you’re trying to record,” says an unidentified male voice.

“You better not,” says an unidentified female.

The Silva camp has claimed the case is part of a smear campaign, orchestrated specifically by his political opponents, and has called the timing of the arrest “suspicious.”

“What they did was the assassination of a particular candidate’s reputation,” Silva’s attorney Sawyer said outside the courthouse on Thursday. “By doing that, they are removing the right for the residents of Stockton to choose who their mayor is.”

Amador County District Attorney Todd Riebe said the case had been handed to him by the FBI in July, and had been examined thoroughly before his office decided to prosecute. The case was “motivated by the evidence,” he said.

“We looked at the evidence, even some you’re not aware of yet, and there existed sufficient evidence to prove each of the charges we filed to a unanimous jury beyond a reasonable doubt.

“I could care less about San Joaquin politics,” he added.

Silva is due back in court on September 7.