PokerStars’ 2017 World Championship of Online Poker (WCOOP) wrapped up on Tuesday with the conclusion of the $5,200 buy-in Main Event. The Netherlands’ Steven van Zadelhoff, a well-known circuit grinder who plays online as“SvZff,” finally has his big breakthrough by claiming the $1,624,502 first-place prize. 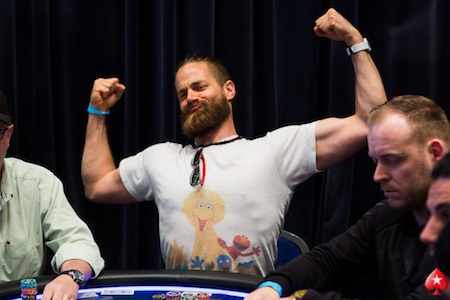 A Dutchman playing from Malta, van Zadelhoff began the final table with more than a third of the chips in play. He had a stack just shy of 38 million, while his next closest competitor, “joshuah333” from Canada, had 12.6 million.

If the name Steven van Zadelhoff sounds familiar, you might know him from the live circuit where he’s amassed $1,509,481 in earnings dating back to 2007. That ranks him 13th on the Netherlands’ all-time poker money list. His best live score was $148,588 for winning the 2009 Spanish Poker Tour Grand Finale Main Event. But that payday was less than a tenth of what his WCOOP would net.

Fittingly, the two big stacks made it to heads-up play, with van Zadelhoff holding a 2-1 chip advantage.

“This is what perseverance looks like,” van Zadelhoff posted to Facebook after the win, along with a graph showing his online profit. “Or some people call it stubborn gambling, that is fine for me too. But I think perseverance is a cool word.”

He was also forthcoming about his sharing agreement, acknowledging that of the $1.6 million win, he would personally be taking home $266K, while a bunch of investors, or as he called them “super happy friends,” split the rest.

“Still can’t believe it,” he added. “Amazingly proud of all the hard work and super grateful for the insane hotrun I go in this one.”

It also worth noting that, after 81 events, Russia’s “ImluckNuts” ended up atop the 2017 WCOOP leaderboard with 830 points. That means he will not only be awarded a Champions Trophy, but also receive a package to the 2018 PCA and a $20,000 cash prize.