Outspoken music producer Steve Albini — who’s made no bones about dissing the practices of his own industry when it comes to exploitation of artists and refusing to take royalties from album sales — produced his own hit on Saturday night in the WSOP 2018 Event #31, $1,500 Seven Card Stud tournament. 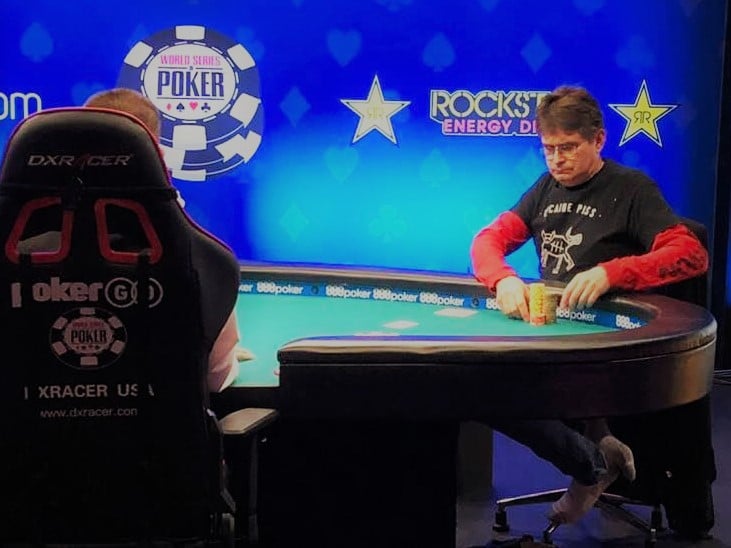 Outlasting two Players of the Year (POY) who are both six-time WSOP bracelet winners — Chris Ferguson and Jeff Lisandro — at the final table to win his first major poker title, Albini carried his fabled fearlessness right onto the felt.

Albini — who’s repeatedly stated he thinks it’s unethical for producers to make ongoing income off of artists’ album sales and walks his talk by only working on a flat fee — continued to stand on his own two feet when he earned his paycheck on Saturday, taking home $105,629. His previous best win was for $40,694 in the WSOP 2014 Seniors event.

Last night’s win puts his lifetime tournament take at $164,228, so he’s probably not giving up his day job just yet. But obviously it wasn’t about the money for a man whose net worth is estimated in the $10 million range: it was about the showdown.

Albini — who perfected his stud game in his hometown of Chicago with the help of top poker pros like Brandon Shack-Harris — put on a clinic at the final table. Running well didn’t hurt his performance, either.

The music producer moved in for the kill with four players remaining in a hand against reigning WSOP POY Chris Ferguson. Jesus had already eliminated four opponents himself at the final table and had a sizeable chip lead.

After bets and calls leading up to the final face-down card, both players had well-disguised monster hands on seventh street when Ferguson — holding an ace-high flush — re-raised right into Albini’s queens-full killer.

Recalling a similar situation against Ferguson on Day Two on Friday, where Ferguson had a disguised aces full, Albini opted to just call the re-raise rather than four-betting. Regardless, he won a massive pot that moved him into the chip lead.

“I was hoping he made a flush,” 2000 Main Event champion Ferguson told CardsChat after the hand. “When he raised me on seventh street, I figured I was about to win a big pot. But that’s how it goes.”

Jesus — who is somewhat legendary for an expressionless face, no matter what’s going on — at least didn’t appear tilted by the cooler situation.

Ferguson attempted to regroup, but it wasn’t long before he ran his trip sixes on fourth street into Lisandro’s trip jacks for another major setback. He was eventually eliminated in 4th place, missing out on his seventh career WSOP bracelet.

After Katherine Fleck busted her small stack in 3rd place, Lisandro had a golden opportunity to win his own seventh bracelet. All he had to do was hold onto a 3-1 chip lead against a non-pro. But if that seemed like it should have been an easy task for a veteran, it wasn’t.

Albini, who was sporting a shirt bearing the name of his band “Cocaine Piss,” frustrated the 2009 Player of the Year during a long heads-up match. After the massive chip lead was squandered, the duo went back and forth for over an hour before the now first-time bracelet winner finally ground Lisandro’s stack down to the felt.

It was a surprising heads-up victory considering the player with a 3-1 chip disadvantage had no previous wins and had to beat out a poker legend. But solid play, timely hands, and the poker gods smiling down can help any player overcome even the longest odds.

Great result for Steve navigating that tough field nice profit
for him turning $1500 into $105000 not an easy task but
he done it.

Go with Steve Albini any time. WHY.. NIRVANA IN UTERO also for anybody out there looking to become a musician (which sounds a lot like the road to poker pro) GO read his article, the problem with music industry today, written in 96 but I can only imgaine its much worse than it was then. The whole thing is really eye opening and I guess you could insert making it in poker the same way. the gest is SOme of your friends who are making it in music are making less than a 7-11 worker LOL