It’s becoming a broken record to report that Stephen Chidwick has won a US Poker Open event. On Thursday, he shipped yet another one, his third in just nine attempts. This one, Event #1: $10,000 No-Limit Hold’em, was good for $216,000. 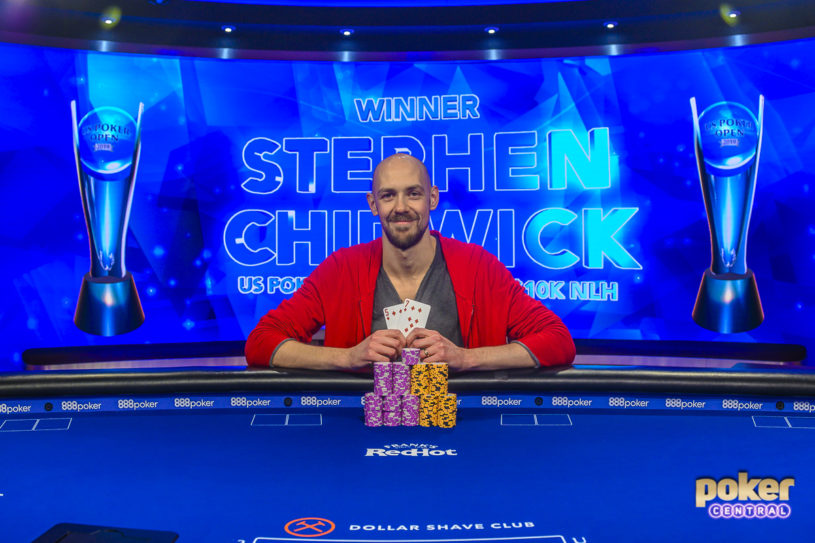 We wonder if Stephen Chidwick ever gets tired of taking winner photos at the US Poker Open. (Image: Poker Central)

The Brit outlasted a field of 90 entries, all of whom probably should have known they were playing for second. Sean Winter, the runner-up, was on the receiving end of a sick cooler to bust. But he should feel pretty lucky to have even made it to heads-up play.

Tough to Beat a Skilled Card-Catcher

Beating Stephen Chidwick on any day is difficult. He doesn’t have $21.5 million in lifetime tournament earnings on accident. But when England’s all-time winningest player is catching cards, you might as well just hand him your chips.

On the final hand, Winter picked up pocket eights in the big blind and raised it up following Chidwick’s limp with 7-5. The players saw a 9-6-K flop and Winter continued his aggression but got a call.

Drawing to just two outs, Chidwick hit the sickest card in the deck – an 8, giving him a straight and his opponent a set. Stephen began the hand with over 7 million chips against 4.1 million. As you probably expected, all the money got in on the turn. A river 3 was no help to Winter who was eliminated in second place for $157,000.

Lazaro Hernandez helped Winter move up the pay scale. After semi-bluffing with an open-ended straight draw against Chidwick’s flopped nut straight, Hernandez then dumped his remaining chips to the eventual champion thanks to a pre-flop all-in with a weaker ace that got no help from the community cards. He was eliminated in fifth place for $72,000.

After that, the cards started falling Winter’s way. One double-up led to another and before anyone could blink, he was a serious threat to win – right up until he ran into that one final cooler.

Chidwick earned the US Poker Open championship trophy last year because he was unstoppable. He won two tournaments out of the eight events. And he also made the final table in three other events, cashing for a total of $1.2 million.

With his victory on Thursday, he’s off to another great start, earning $216,000 and 200 series points. But with nine events remaining, it’s still anyone’s ballgame. Just don’t be surprised if Chidwick successfully defends his crown.

Event #2: $10,000 Pot-Limit Omaha also got underway from the PokerGo Studio in Las Vegas on Thursday. You can catch that final table in its entirety on the PokerGo app Friday beginning at 2 pm PT.

That is a great! Hope he will keep with good games. Fortune favors the brave 🙂

if this is a player monster, one of the best in these times, has been consolidated in live poker as one of the most solid, esperemos seeing his performance in the wsop