Station Casinos Jumbo Progressive Beat Beat jackpot was hit on Tuesday after KhQh caught up to quad aces on the river. Dealt at Boulder Station, the loser in this hand received $34,646, the winner $23,097, other six players at the table received $11,549. 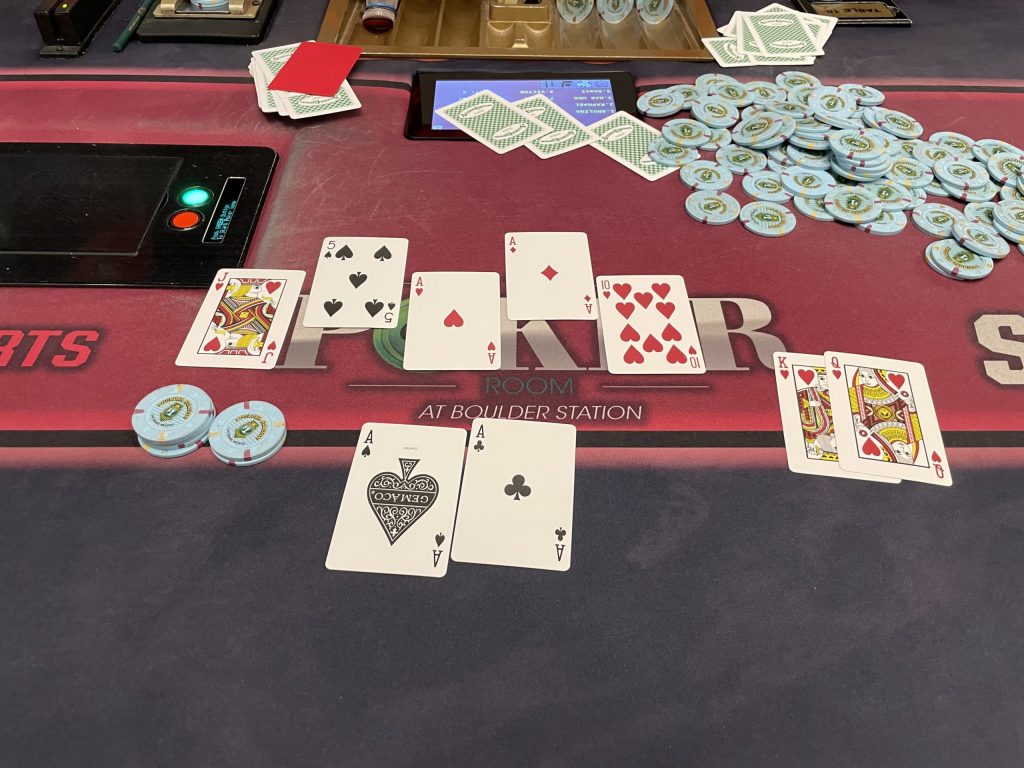 Sometimes it pays to get royally f-ed. (Image: Station Casinos)

Station casinos’ Jumbo Progressive starts at $75,000 and is fed by taking a dollar or two out of every pot in all three poker rooms. This additional rake makes Bad Beat jackpots unpopular with many professional players. Station Casinos caters to Las Vegas locals.

If that hand was dealt today, it would only qualify as a bad beat story and not as a bad beat. Bad beat jackpots at Station Casinos always start with the loser’s qualifying hand of QQ or better, dropping as the weeks go by and the jackpot kitty grows.

South Point casino’s poker room, another Las Vegas local mainstay, is another room with a bad beat jackpot. In this case, the bad beat fluctuates depending on the hands in play: it’s a Mega, which starts at $60,000 and is active when a straight flush is beat, a Major, when quad fours or better are beaten, which starts at $30,000, and a Mini, when aces full of deuces up to quad treys are beaten.

Other ways to win

South Point is a promotion-heavy room. On Friday and Saturdays between 9:15 a.m. and 4:45 p.m., the poker room pays $250 to the high hand of the hour. Another $250 is given away to random players twice an hour, at a quarter and three-quarters past the hour, to be exact.

The room’s “Hot Card Daze” promotion has been running all year, as well. Every Tuesday and Thursday, players can win up to $1,000 by hitting sets with selected hands of the month. Pocket nines are September’s hot pockets.

Meanwhile, on the north end of the Strip, the Venetian is giving away $300 every half hour to players sitting at the tables between 12:15 p.m. and 11:45 p.m. The money is awarded to the winner of a hand on a randomly selected table each hour. The promotion runs through September.

In October and November, The Venetian will give $300 to the highest hand every half hour to players in the room from 8 p.m. to 2 a.m.

Nearby, the Westgate is also running several high-hand promotions. The Pro Football High Hand will award $50 in chips to players in select games on Mondays, Thursdays, and Sundays. Chips will be awarded to a high hand during each half of play when games are being shown in the poker room.

In another promo, the room is also running an instant high-hand special where players can win extra money. In this case, the pot must be worth $10 or more and both of a player’s cards must play. Hitting quads (with a pocket pair) nets $50, a straight flush earns $100, and a royal, $200.

The room also has a rewards program where players who play 30 hours or more per week can receive $200.