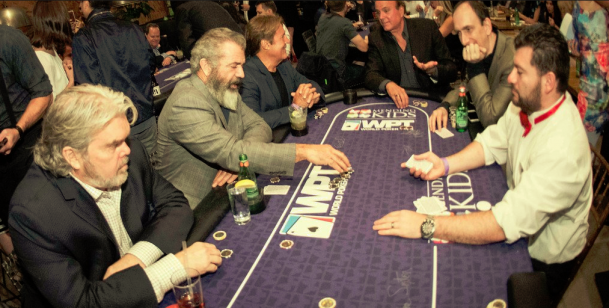 Mel Gibson (center, now sporting a beard) and a host of Hollywood stars joined the WPT for a night of charity poker. (Image: Mending Kids/ WPT/

The World Poker Tour (WPT) showed its benevolent side recently with the latest incarnation of its Four Kings and an Ace tournament.

As part of its ongoing effort to raise money for worthy causes around the world, the WPT hosted a charity event featuring a host of celebrity players.

Unlike the World Series of Poker (WSOP) where the odd star will make a covert appearance in a bid to win a bracelet, the October 21st event saw some of the biggest names in the US turnout for an evening of poker.

Leading the way as the official host was Hollywood’s Mel Gibson who got the tournament underway alongside the WPT’s Adam Pliska, Mike Sexton and Lynn Gilmartin.

Helping to maintain the level of poker on display was a handful of poker pros, including the always animated Scotty Nguyen and eight-time WSOP bracelet winner Erik Seidel. Of course, the standard of poker was never going to be the best, but neither was it meant to be.

The aim of the evening was to raise as much money as possible for the Mending Kids charity which aims to provide surgical care to children in need around the world.

Although the exact amount raised hadn’t been calculated at the time of writing, Mending Kids’ official Facebook page called it a “spectacular” night with an impressive amount of funds raised for “our kids.”

By far the most entertaining hand of the night involved WPT hosts Gilmartin and Sexton. After getting it all-in on the flop with Sexton holding top set, Gilmartin could only hope for a straight flush after her opponent turned a full house.

Naturally, with the cameras rolling, the king of hearts fell on the river to give Gilmartin the winning hand and a dumbstruck Sexton something to tell his celebrity friends on the rail.

Poker Shows Its Positive Side

Although the chips have barely had time to settle in Beverly Hills, the WPT is back on the charity trail once again with another installment of its All in For Kids Poker Tournament.

Set to take place on October 27, the New York event will be hosted by Phil Hellmuth and help raise money for The Children’s Hospital of Philadelphia.

To date, the WPT has raised more than $6 million for good causes. Despite poker often being associated with personal gain, organizations have endeavored to give something back over the years.