A high-stakes home game organized by the World Poker Tour went down on Tuesday night and, as he often does, Tom Dwan made an impression. 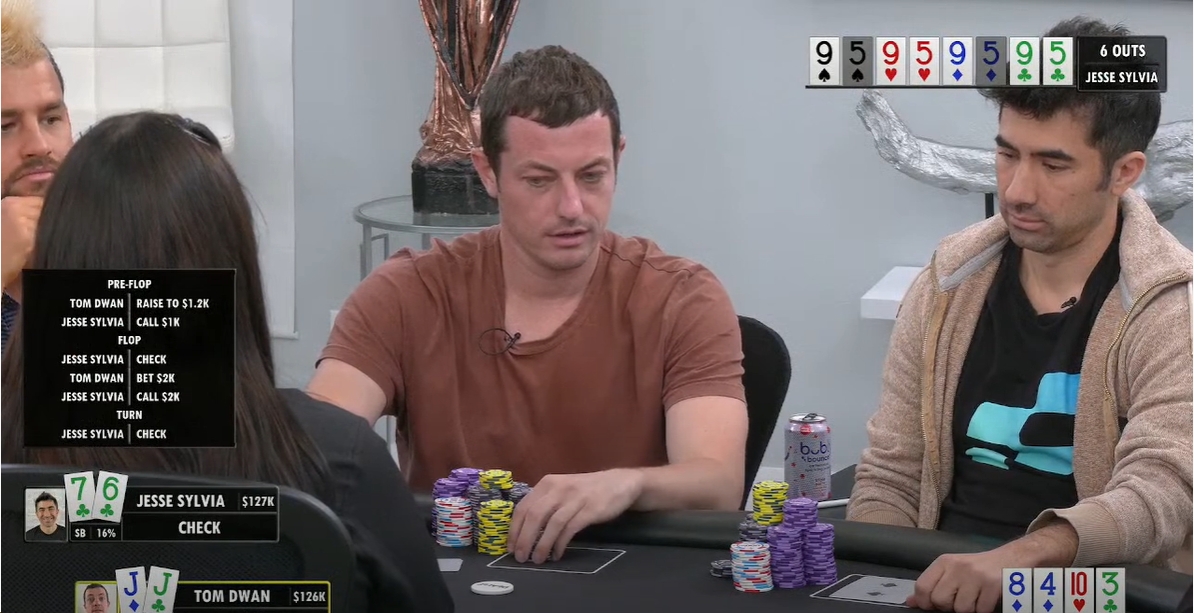 Tom Dwan made a welcome return to our screens last night in a special high-stakes home game organized by the WPT. (Image: WPT/YouTube)

The $200/$400 cash game was the second installment of the WPT’s special home game series. The previous night’s action saw some of the best women in poker and chess battling it out in a $25/$50 cash game. With the ladies putting on an impressive performance, the pressure was on Dwan and his peers to do the same. The man, otherwise known as Durrrr, certainly didn’t disappoint, even if he did spend less time at the table than everyone else.

The WPT teased the lineup for its new high-stakes home games on Aug. 10. Dwan was pictured alongside Landon Tice, and we were told the game would be $200/$400 No-Limit Hold’em.

When the WPT’s Twitch stream started, a table of familiar faces were inside the special home game setting. Joining Dwan and Tice were Jake Daniels, Scott Seiver, Jesse Sylvia, Bruno Furth, and Dan Smith. That’s a tough lineup, but Dwan didn’t seem too fazed by his opponents.

He wasn’t in his seat at the start of the game and casually strolled in almost four hours late with his $50,000 buy-in. And, as he’s done numerous times over the years, Dwan didn’t waste any time putting his chips into action.

LOL @TomDwan just strolled in and did this on his 3rd hand pic.twitter.com/2xlImRfyGX

Three hands in and he faced an all-in from Daniels (see video above). With second pair, a call for his stack wasn’t easy, but Dwan found a way to sniff out Daniels’ bluff. That win put Dwan ahead and sent Daniels on a downward spiral. An all-in with A♥ K♥ against Sylvia’s pocket kings saw another $120,000 slip away from the American pro (see video below).

Daniels wasn’t the only player running into tough spots. Tice had an opportunity to repair some of the damage caused by his recent match against Bill Perkins. But, when his straight was counterfeited by Furth’s full house, things started to slip away from the young pro (see video below). Tice lost $55,000 overall, but committed to playing today’s second session.

It’s been a while since poker fans have been able to watch some good, old-fashioned live cash game action, so the stream was intriguing on its own. But, when Dwan sits down, things become just a little more interesting. The WPT’s home game served as the perfect reminder of what Dwan can do ahead of his upcoming heads-up match against Phil Hellmuth.

The elusive pro has played most of his poker behind closed doors in recent years. However, thanks to a resurgence of games in the US and a sponsorship deal with Poker King, he’s slowly getting back into the limelight. As you’ll see from the video of the whole session (below), he’s certainly not lost any of his skills, which means next week’s match against Hellmuth should be must-see TV.