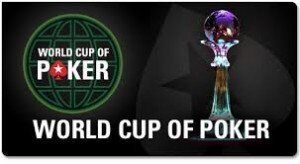 The World Cup of Poker was a play-money affair this year, but what influence did the DGE have in that decision? (Image: pokerstars.com)

Spain has been crowned champion of Poker Stars’ 10th World Cup of Poker, a competition that was remarkable for being the first WCP played entirely in play money. It was also the first to be conducted entirely online.

PokerStars’ decision to go play money is thought to be related to its imminent entrance to the New Jersey online poker market, and also perhaps to its recent decision to pull its real money offering from numerous gray markets around the world.

‘Stars pulled out of at least 30 gray markets suddenly and without warning at the beginning of October in a move that may have been part of a precondition set by New Jersey regulators for entry into the market.

A play money WCP allowed all nations from some 94 markets, including the US, to participate, but there are also rumors that PokerStars had expected to hold the finals live in New Jersey, once it has been granted a license.

Previous incarnations of the tournament have seen live finals between the two final nations take place at the PCA in the Bahamas, and, with October 1st initially rumored to be a likely launch date for PokerStars New Jersey, it seems that the company was banking on this being the showcase for its debut in the fledgling US market.

However, for reasons unknown, the application process has stalled and is still being considered by the New Jersey Division of Gaming Enforcement (DGE).

Senator Raymond Lesniak, a longtime proponent of online gaming in New Jersey, has said that the process has been delayed by Governor Chris Christie, prompting fears that the governor is courting Sheldon Adelson for backing and campaign contributions for a possible run as the 2016 Presidential Nomination.

It should be pointed out, however, that Christie would have no power to veto PokerStars’ application once it’s approved by the DGE.

In a recent interview with the Associated Press, David Rebuck, head of the DGE, said that early 2015 would be the most optimistic assessment of the online poker giant’s possible entrance to the market.

The World Cup of Poker kicked off on November 22, with the US involved for the first time since online poker was effectively shut down there by the Department of Justice in 2011.

It may be that American online poker players are a little rusty, though, after their spell out in the cold, because they didn’t get anywhere near the the final. It was Spain, Italy, Canada and, bizarrely, Kazakhstan duking it out in the final four, with the Spanish beating Canada heads-up for the bragging rights, and very little else.

Spain’s “minnie2354” won 64 million in play chips when his A-10 was too good for his Canadian opponent. Just don’t spend it all at once.