Nevada ends its mask mandate, a casino memorabilia show coming to Las Vegas, and South Dakota acting on online sports gambling are some of the news bits CardsChat picked up during another orbit around the poker world the past week. 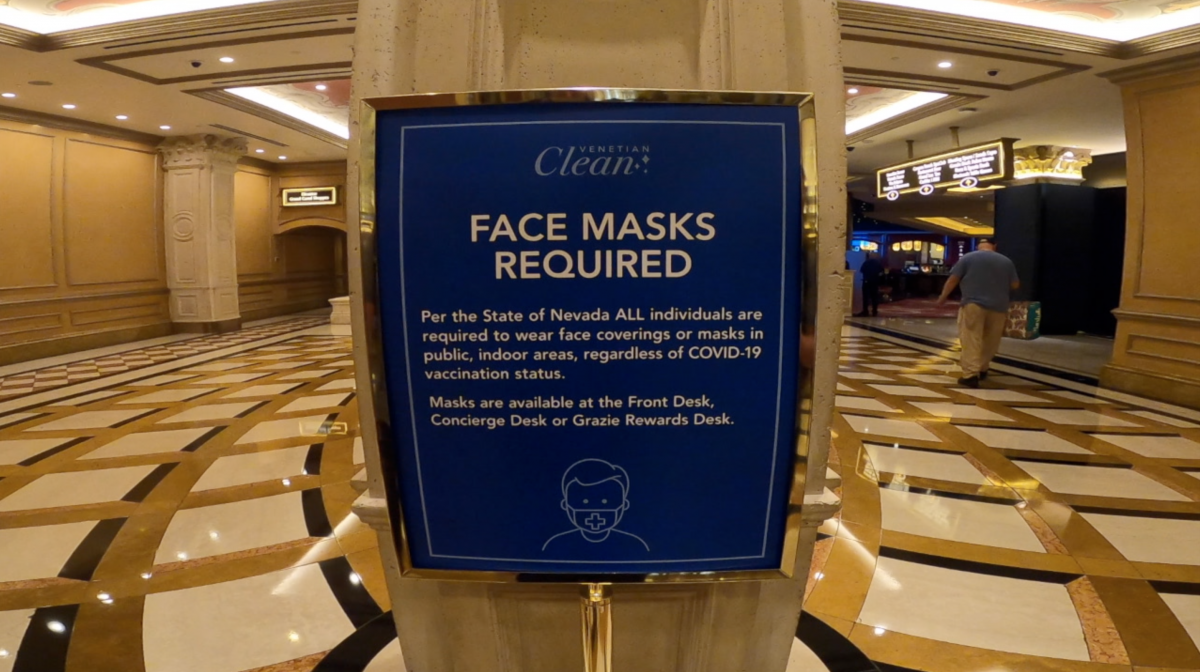 Visitors to card rooms in Las Vegas will soon be able to throw away their masks. (Image: KTNV)

The Governor of Nevada will lift indoor mask mandates today, joining California, New York, and Delaware in allowing its residents to go maskless in casinos and card rooms.

According to the Nevada Independent, and several other Nevada-based news sources, Gov. Steve Sisolak will announce the change during a virtual press conference about COVID at 10 am PST. In New York, Gov. Kathy Hochul is also allowing her state’s mandate to expire today. Delaware’s mandate ends Friday.

During a conference call about MGM Resorts International’s fourth-quarter earnings earlier this week, CEO Bill Hornbuckle seemed to tip the Governor’s hand. “I expect that given positive COVID trends in Nevada, we will start to see meaningful lifting of COVID restrictions in the very, very near future consistent with what we have seen in other states,” Hornbuckle said.

Despite the mask mandate, casinos in Nevada went on a pretty good winning streak in 2021 — 10 months a row pulling in at least a billion dollars.

A push for Yonkers

New York Majority House Leader Andrea Stewart-Cousins wants the slots parlor MGM Empire City at Yonkers raceway to get one of the three casino licenses up for grabs in the New York Metropolitan area.

MGM Resorts International, which owns Empire City, joins a crowded field, which is vying for the lucrative casino licenses. Empire City sits in her district. “Of course I’m going to support my hometown casino, which by the way, has done the work,” Stewart-Cousins said, according to the New York Post.

New York’s Gaming Commission is expected to award the licenses later this year.

Poker professional and Twitch streamer Jeff Gross told his Twitter followers he’s ending a three-year run streaming for partypoker. Gross said the combination of raising a small child and living in the US is forcing him to cut back on his poker streaming.

He said he will collaborate with partypoker on future projects.

My time as a core streamer for the @partypoker team has come to an end.
It has been a truly incredible 3 years; not only streaming on twitch but working behind the scenes with an incredible group of people. pic.twitter.com/GphUB4ZDg1

His Twitch channel will remain active.

“This is not a good bye, just a beginning,” he said.

The South Dakota senate advanced a proposal that puts the fate of online sports betting in the hands of voters. The measure passed the Senate 18-17, and will face the same stiff resistance from the 70-member house.

If the house passes SJ 502, it will appear as a referendum on November’s ballot.

The three-day exhibition is set to run June 16 through 18 in Exhibit Hall C at South Point Casino.

More information can be found on the group’s Facebook page.