A Mississippi casino gives kids the boot, a $1 million bad beat jackpot in the City of Champions, and the WSOP putting Jesus in the corner are some of the short stacks CardsChat picked up in last week’s orbit around the poker world. 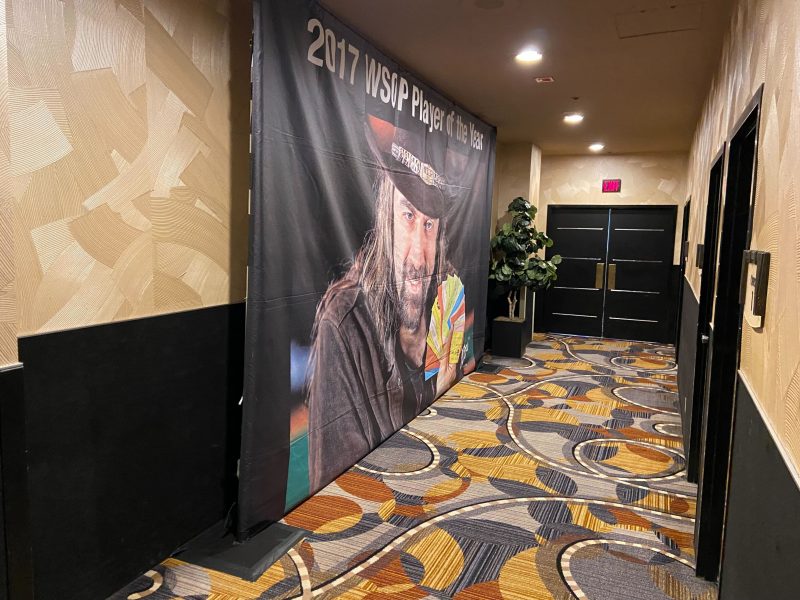 Chris “Jesus” Ferguson’s Player of the Year banner is tucked away from the rest at Bally’s. (Image: Johnny Kampis / CardsChat)

Chris Ferguson tucked into a corner

Throughout the hallways of Paris and Bally’s, banners celebrating past champions and Players of the Year can be found.

Some are more prominently displayed than others. That means others are tucked away, almost like WSOP officials tried to hide them.

Now, why would they put 2000 WSOP Main Event champ and 2017 Player of the Year Chris “Jesus” Ferguson in a hallway that seemingly only workers would use? It couldn’t be because of his role in the whole Full Tilt Poker Ponzi scheme all those years ago, could it?

We have our guess, and are also wondering what that plant did wrong.

Bad beat jackpot at Rivers Pittsburgh is over $1 million

The bad beat jackpot at Rivers Casino in Pittsburgh is worth $1,001,216 as of today. It took more than a year to get it that high.

To score the big win by losing with a seemingly unbeatable hand, a player must be holding quad 10s or better and still watch the pot get pushed to his (or her) opponent.

Love them or hate them, this bad beat jackpot will likely change the life of whatever yinzer is lucky enough to take home the big chunk — 40% goes to the loser, 30% to the winning hand, and 30% is equally divided among the players who were dealt into the hand at the table.

The WSOP revealed its new $5 million chips at the final table of the $500 Housewarming event that brought in 20,080 entries last week.

In play for the very first time today, used on the final day of the House Warming, the silver and pink 5,000,000 chip! We probably won't see this chip again until the Main Event final table! pic.twitter.com/qhesUjeXbH

Remko is probably right. The chip will most likely stay locked away until the final table of the Main Event is in sight.

For dessert, they had two orders of Monkey Bread, $17 each.

My most expensive dinner bill so far pic.twitter.com/sJVWlU8d3L

Starting July 1, children won’t be welcome anywhere in Mississippi’s Silver Slipper Casino and Resort, as the entire property will be restricted to guests aged 21 and older.

The casino is changing its policy because parents have been leaving their kids unattended while gambling. According to the Sun Herald, the casino has been cited by the Mississippi Gaming Commission over this, and John Ferrucci, its general manager, is fed up.

“We invite parents to come back when they have a babysitter,” he told the paper.