Sheldon Adelson is reportedly interested in obtaining ownership of Wynn-Encore Casino Resort in Las Vegas. After the rumors began swirling of the casino mogul’s interest in the property, Steve Wynn’s stock prices skyrocketed. 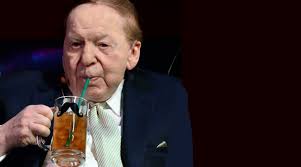 Sheldon Adelson has been rumored to be interested in acquiring a competitor’s property: Wynn-Encore Resort and Casino in Las Vegas. (Image: forward.com)

The rumors started Thursday morning, causing some investors to jump all over Wynn Resorts stocks. Early in the day, the price of the stock was at $99.81 per share. At one point in the day, a $125 price point was reached, the first time ever for that stock. It closed at $106.17 at day’s end.

Adelson, the billionaire CEO of Las Vegas Sands, would be a surprising owner of the luxurious Wynn-Encore property. He already owns the neighboring Venetian-Palazzo on north-central end of the Las Vegas Strip.

He’s long been one of Steve Wynn’s most fierce competitors, both targeting the same upscale clientele.

It’s unclear if there’s something to the rumors or if it’s just that, a rumor. Thus far, the reports have been unsubstantiated.

According to Robin Leach, former host of Lifestyles of the Rich and Famous, “most respectable bankers and brokers dismissed the report as rumor and fantasy,” he wrote in a Las Vegas Review-Journal column.

Even if Sheldon Adelson actually does have an interest in purchasing Wynn Resorts, will he pull the trigger on the deal? If his recent history is any indication, the answer is no.

The billionaire Republican lobbyist who despises online poker was supposed to be the guy to bring the Oakland Raiders NFL team to Las Vegas. He originally pledged to commit $650 million towards the funding of a new football stadium in Sin City.

At the last minute, he backed out of the deal, leaving the Raiders scrambling to either find a new investor or remain in Oakland without a stadium deal in place.

Fortunately, for the organization, Bank of America has stepped up to the plate and pledged to take the casino mogul’s place. The team has yet to decide if it will move to Las Vegas, but one thing is clear: Adelson will have no part in the Raiders’ future.

There are many poker players who refuse to play at Venetian. Should Adelson acquire Wynn-Encore, some who play at that casino may need to find another place to play.

Adelson has long lobbied to get the federal government to ban online poker nationwide, but to no avail. He promoted the Restoration of America’s Wire Act (RAWA) and hasn’t given up his crusade to make internet poker illegal even after the bill failed miserably.

But, hey, maybe he’ll soon scare some poker players away from another fancy casino in Las Vegas.