Saying that Sheldon Adelson is wealthy is as big of an understatement as accusing Charles Manson of being mean. But how rich is he? According to Forbes’ updated list of world’s billionaire, the casino mogul checks in at number 20. 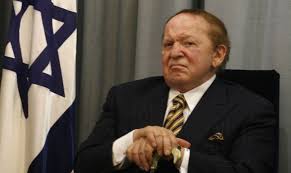 Sheldon Adelson is listed as the 20th wealthiest person in the world according to Forbes. (Image: mondoweiss.net)

Adelson is currently worth $30.4 billion, although that number can fluctuate daily based on market performance. To put things into perspective, the CEO of Las Vegas Sands, the company which owns the Venetian, could afford to cover the entire WSOP Main Event prize pool out of his own pocket…for the next 450 years.

Many poker players probably feel he owes it to the poker community to chip in. Adelson has fought for years to banish online poker in the United States. And while it isn’t illegal to play online, many consider him partially responsible for a lack of quality sites to play poker on the internet in America.

There are only three states (New Jersey, Delaware, and Nevada) with licensed and regulated poker sites.

How He Stacks Up

As wealthy as Adelson is, his bankroll pales in comparison to some other successful businessmen. Microsoft CEO Bill Gates remains at the top of the list, worth $86 billion. Investor Warren Buffett is the second wealthiest person in the world ($75.6 billion). Facebook founder and CEO Mark Zuckerberg checks in at number five, worth an estimated $56 billion.

President Donald Trump is now worth $3.5 billion, according to Forbes. The publication claims the leader of the free world dropped 208 spots from number 336 last year to 544 currently. He was said to be worth $4.5 million prior to running for president. On the campaign trail, the real estate investor claimed he is worth at least $10 billion.

Adelson’s anti-online poker stance has made him one of the most despised persons in poker. But his Venetian poker room is still one of the most popular places to play cards in Las Vegas.

Many see it as “petty” that such a wealthy man is so concerned with preventing pro-online poker legislation to protect his finances. But that hasn’t stopped him from continuing to push his agenda.

Adelson promoted the Restoration of America’s Wire Act (RAWA), anti-online gambling legislation that was never passed by the federal government. If it did, internet gambling would be illegal nationwide. Instead, it’s legal for a poker player to play cards online but it isn’t legal for banks to accept online casino transactions. That makes it difficult for poker site operators to conduct business in the United States.

The Las Vegas Sands CEO is extremely wealthy, but he appears unwilling to give up his fight against online poker.