Sheldon Adelson will never give up his push to ban online gambling in America. The owner of the Venetian Hotel & Casino in Las Vegas, among several other properties across the US and in Macau, continues to do his part to ensure poker players in America won’t get to enjoy the game they love online. 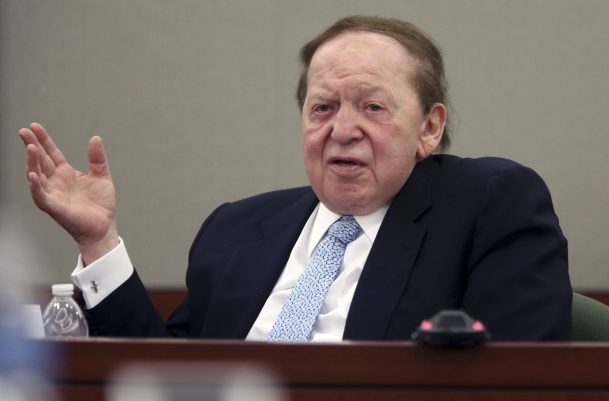 At age 83 and a billionaire, some may wonder why he’s continuing this quest to stop the Internet gambling industry. But, as hip hop duo Young Gunz famously sang, “can’t stop, won’t stop.”

Adelson was the brains behind the failed Restoration of America’s Wire Act (RAWA), a bill that would have made online gambling illegal in all 50 states. Now, he’s trying other ways to ban Internet gambling.

Senator Lindsey Graham (R-SC) made a push for a White House bid this past year, but received about as much support as RAWA. One person who did support his campaign was Adelson. The Senator has now returned the favor.

“Internet Gambling, since 1961, the Wire Act has prohibited nearly all forms of gambling over interstate wires, including the Internet. However, beginning in 2011, certain states began to permit Internet gambling. The Committee notes that the Wire Act did not change in 2011. The Committee also notes that the Supreme Court of the United States has stated that ‘criminal laws are for courts, not for the Government, to construe.’”

RAWA is essentially dead. Adelson’s numerous attempts to pass it failed. But the new language Graham had put into the Appropriations Bill has a similar provision.

Graham’s current attempt, like RAWA, is to convince Senate committee members that the Wire Act hasn’t changed and, therefore, Internet gambling should be illegal nationwide.

Adelson and Graham believe the court system should determine the legality of online gambling in America. But many believe the government has the right to decide. This has long been debated by opponents of RAWA and other anti-online gambling measures.

Culberson Unlikely to Love It

It’s possible the South Carolina Senator expected no one to notice the anti-gambling language in S.2837. But it’s unlikely it will go very far with its current wording.

The bill now moves over to the House Appropriations Committee. Once there, US Rep. John Culberson (R-TX), the committee’s chairman, will have an opportunity to immediately remove the language. If that happens, Graham will be out of luck.

Of course, there’s no guarantee Culberson will remove the anti-online gambling wording or that, even if he doesn’t, the House Appropriations Committee will send it off to President Obama to sign into law. Culberson hasn’t even spoken publicly yet on this issue.

But, like RAWA, most don’t expect the government to pass any sort of law banning online gambling in all 50 states.

I too opposed Online gaming, when it was first being considered for New Jersey. Because I feel it removes a reason for casinos players to visit live casinos, like Sheldon’s wonderous Venetian’s in Las Vegas and Macao, or his Marina Bay Sands in Singapore. But I don’t feel it will do as much harm to destination casino resorts, as Sheldon. Sheldon had revolutionized the gaming industry, with his concentration on destination facilities that attract the World’s largest conventions and trade shows; that include thousands of top quality rooms, millions of sq ft of meeting and exibiton space; plus millions more sq ft, designated to top quality retail; and many theaters and show rooms to porvide more than just casino entertainment.