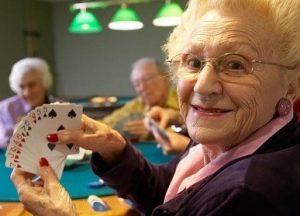 Dangerous gamblers? Senior citizens in Muncie, IA have had their games disrupted by the state’s Gambling Commission. (Image: raketherake.com)

The Indiana Gaming Commission has ordered a Senior Citizens Center to shut down its micro-stakes card games, where prizes range from toilet paper to tinned peaches to bottles of hand soap, because they amount to illegal gambling.

The regulator contacted the Delaware County Senior Citizens Center in Muncie last week, warning director Judy Elton to stop allowing prizes for the euchre games, which have buy-ins of no more than a couple of dollars.

“The seniors are outraged,” Elton told the local press. “I’ve encouraged them to write to their state representatives.”

It’s not just the players who are outraged.

The news, which was first reported Muncie’s Star Press newspaper following complaints from relatives, provoked overwhelming public support for the senior citizens, and even reached the ears of the state governor.

Governor Mike Pence said that the games should not be shut down and pleaded for the gaming commission to use its common sense.

“When Governor Pence became aware of the situation in Muncie this morning, he directed the Indiana Gaming Commission to make sure it does not have any plans to shut down euchre card games at the Delaware County Senior Citizens Center or to take enforcement action against them,” said a spokesperson for the governor’s office. “He has asked the Commission to review its procedures to ensure common sense prevails when reviewing complaints and concerns.”

This forced the Gaming Commission to backtrack and insist that it had no intention of taking action against the games.

Gaming Commission Executive Director Sara Tait told the Star Press that the games were similar to “$5 poker night with friends” and that the commission uses a “common sense litmus test.”

“Consistent with our goal of educating organizations about charity gaming compliance, the organizations were sent a form email with information about the kinds of licenses available,” she said. “We distribute regularly such email information following the receipt of a complaint.

“As is consistent with our practice in such matters, once the Indiana Gaming Commission sent the email, there was no intention to address this further and no additional communication, as expending resources on such minor issues is not consistent with Commission priorities,” she added.

However, for now, the card games continue, albeit without prizes, and the senior card players remain nonplussed.

The Star Press also spoke to Berylda Wilson, 88, who has played the games at the center for 15 years.

“We play five games and we have snacks, then play five more games,” she explained. “Whoever has the high score gets to come up and pick a prize. We use the money to buy the prizes with and we buy sympathy cards or go out to dinner if there’s money left. We all get our money back.”

Damn political agenda donks that have nothing better to do in life but make everybody else’s lives miserable. These elder folks are on their last (excuse the pun, not intended) half of their lives…they can’t take it with them as the saying goes…..

LET THEM HAVE THEIR FUN!!!

It was possibly nice for them, just killing time.but it looks bad from here.Wining toilet rolls thats so prison,its makes me wonder how else they are treated.