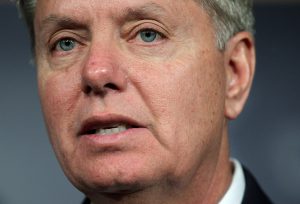 Last week, Nevada senators strongly hinted that a federal bill was about to be introduced that would make online gambling illegal. The silver lining in the statement was that online poker would not be considered gambling, and therefore would remain outside the purview of the proposed law. But new reports say that U.S.Senator Lindsey Graham (R- SC) is about to introduce a federal ban on Internet gaming; but with the caveat that this new bill would also purportedly aim to make online poker illegal.

Reinterpreting the Wire Act of 1961 – Again

The original report from Gambling Compliance – which was passed on to the Poker Players Alliance (PPA) – says that this legislation will be introduced soon and plans to once more reinterpret and expand the Wire Act of 1961 – which in 2011 was declared to only apply to Internet sports betting by the U.S.Department of Justice. The planned bill would place a ban over Internet gaming altogether, alongside prohibitions that are already in place. Should the bill be passed in the Senate, it would then be up for debate and vote in the House of Representatives.

Senator Graham is said to be firmly against any form of online betting. He is also adamantly against an exemption for online poker, and says that he would oppose efforts from other senators who might be proposing a poker-only federal regulation. Both Senate Majority Leader Harry Reid (D-NV) and Senator Dean Heller (R-NV) are believed to be pushing for a poker-only regulatory system.

When Graham introduces the bill, the United States Senate will debate the bill and potentially vote on the issue. Currently there is a 55-45 majority in favor of the Democratic party, with some Democrats expected to side with the bill. When the bill is introduced, its specific contents and direction will become better known, allowing both legislators and American citizens to debate its merits – or lack thereof.

This announcement comes on the heels of the recent news that Nevada and Delaware have aligned on a gaming compac to pool their players. Meanwhile, in California, two bills were just introduced that could potentially create the largest intrastate online poker environment in the United States, if legalized.

With Las Vegas Sands Corporation CEO Sheldon Adelson on his personal crusade to rid the United States of online gambling altogether, many corporations and politicians have been forced to pick sides. With deep pockets, Adelson has promised to fund any and all efforts that would derail any pro-gaming legislation. His self-funded lobbying group – known as the Coalition to Stop Internet Gambling – has polarized both for and against viewpoints within the industry, and beyond.

Legal battles in states such as California, Pennsylvania, and Mississippi continue to grow. But only California is considered to be seriously in contention for passing pro-gaming or pro-online poker bills in 2014. However, if a federal bill banning gambling and poker on the Internet is passed, all the state debates become moot, including those in Nevada, Delaware, and New Jersey, where these operations are already taking place. They would be forced to abide by federal law, shutting down any and all current operations.

A CEO of Las Vegas Sands Corp. seeking laws put in place to dictate that the populace of the United States be not allowed in the privacy of their owns what his corp. provides in the public of their businesses. What’s next? Insurance companies seeking laws to not allowed to sell insurance through the internet? Or maybe only cars can be manufactured in Detroit? Let me lay one down that actually makes more sense. A bill that any and all forms of gambling provisions be ruled as non profit businesses that support care for the sick. Oops! I forgot, there’s already laws in place that makes certain medical and insurance companies bigger than they had a RIGHT to be. Rights, its nothing new as rights are seemingly becoming more an exclusive club all the time. Your gas stations made good money when the traffic was on main street, but getting laws passed that keep freeways from being build isn’t RIGHT. And if the Federal courts rule in favor of a monopoly it won’t be the 1st time.

There is no way the Senate debates this bill this year. They won’t debate the Graham bill nor the Heller/Reid bill.