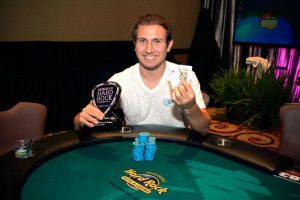 The Seminole Hard Rock Poker Open (SHRPO) has become one of the biggest poker events of the year, offering millions in prize money in its Main Event and a host of preliminary tournaments.

But on Friday, a host of poker pros and celebrities turned out to play in an event that was more about helping others than claiming a big prize for themselves.

The Charity Series of Poker (CSOP) held a tournament at the Seminole Hard Rock that drew a record field of 232 players on Friday, raising more than $32,000 for Habitat for Humanity in the process.

The tournament was played in a single evening, and ended with David Somers taking home the top prize of $9,743.

According to Somers, a 19-year-old who grew up in the same town as CSOP founder Matt Stout, his upbringing helped him make the decision to participate in the charity event.

“I went to a Jesuit high school and now I go to a Jesuit college, and they really stress the importance of being men and women for others,” Somers said. “So being able to give a few bucks to help out folks who aren’t as fortunate as I am is a great thing.

Somers also said that one of the biggest thrills of the tournament was getting a chance to play with some of his poker heroes. Many famous pros made time for the CSOP, as did some celebrities who are known to enjoy the game.

Among the poker players in attendance were Scotty Nguyen, Phil Laak, and Will Failla, as well as Jennifer Tilly, who fits both into the “poker player” and “celebrity” camps.

Actors including Mekhi Phifer, Sasha Barrese and Omar Benson Miller were in attendance as well.

Many of the players were also there to participate in the SHRPO Main Event, which began on Saturday.

“I can describe my abilities in one word: suspect,” Miller told the Sun-Sentinel. “I like to gamble, but I’m better at games like craps.”

Despite all of the famous names in the field, the CSOP event resulted in a final table with few familiar faces.

With an extremely quick structure designed to complete the tournament in one night, the atmosphere was more fun than serious, and rebuys were taken liberally in order to raise more money for charity.

But in the latest stages of the tournament, a possible storyline emerged. Nick Yunis, the winner of last year’s charity event, made another deep run this year, and actually ended up facing off against Somers heads-up for the chance to defend his title.

With the blinds high and the stacks shallow, an all-in confrontation seemed inevitable.

In just a few hands, Yunis ended up moving all-in with 86 offsuit against the J5 suited held by Somers.

The J-5-4 flop gave Somers two pair but kept Yunis alive with a straight draw. An ace on the turn helped neither player, and a jack on the river improved Somers to a full house, giving him the title.

The CSOP tournament also gave away prizes to the players who reached the final table, ranging from resort packages to signed football jerseys from players like John Elway and Dan Marino.

For first place, Somers was awarded a seat into the $5,250 SHRPO Main Event.

its a nice to have positive poker stories on occasion !