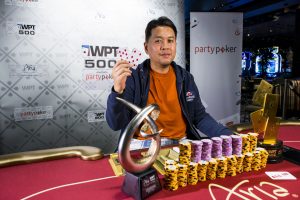 Sean Yu entered the Aria WPT500 on Wednesday morning and won $260K in the wee hours of Thursday morning: all in a day’s work. (Image: World Poker Tour)

The World Poker Tour wanted a piece of the summer poker action in Las Vegas, and the WPT500 idea turned out to be exactly the way to do it. The $565 buy-in reentry tournament at the Aria was a huge success, with a massive prize pool that far surpassed its original $1 million guarantee.

A different tournament in many ways, the event offered six starting days, the last of which was a turbo. Players could reenter every day, whether they had chips from a prior day or not. And the top 10 to 12 percent of each day’s field received at least $750 when exiting, with $1,000 going to the top seven to nine percent. Only the top five percent of each day’s field moved on to Day 2, which was set for July 9.

Players in Las Vegas for the WSOP $10K Main Event had a low buy-in option for their days off, and this tournament offered an opportunity to play if the $10K buy-in was out of reach. The final registration results showed that the idea was well received.

The first day of the tournament was July 4, the day before the start of the WSOP Main Event. That day drew 443 players and finished the night with 22 of them bagging chips for Day 2.

The second day added another 366 players with 18 finishing the night, and Day 1C added 457 entries to the total with 22 bagging chips. Day 1D brought 780 more entries into action, forcing many to wait for seats as alternates but all given the opportunity to play eventually. That night ended with 36 players. Day 1E brought in a massive 879 entries with 44 finishing with chips.

Everyone gathered together for the start of Day 2 in the early afternoon hours of July 9 and continued to play. Everyone was guaranteed a return on their investment, and some who cashed out included Mike Sexton, Mohsin Charania, Jamie Kerstetter, Andy Hwang, and Chris Baud.

Play continued late into the night, and the tenth place elimination of Kazu Oshima for $20K set the final table with just nine players. And they kept moving forward, with these stacks to keep them awake:

Soufiane was the first to depart the action with tens unable to crack the aces of Marshall. Fleischer then had A-K cracked by the A-Q of Harder to exit in eighth, and Benhamou fell to Marshall in seventh.

On the 50th hand of the final table, Nargentino’s jacks were outdone by the A-J of Clements with an ace on the board. A big hand developed with Marshall holding A-J, Clements all-in with A-Q, and Ray all-in with A-8. Nothing on the board changed the order, so Ray left in fifth, Clements more than doubled, and Marshall suffered a setback.

Sean Yu then made a run by doubling through Clements and then again through Marshall. Meanwhile, Harder ran his 9-8 on a nine-high board into the pocket kings of Marshall for a fourth place finish.

Three-handed play had Yu in the lead and Marshall in a close second. Clements was on the short stack and went into battle with A-4 against the jacks of Yu. Nothing on the board changed anything, and Clements exited in third.

The leader going into heads-up was Yu, and though Marshall doubled up and eventually evened the stacks, Yu quickly regained control. On the 149th hand of the table, Marshall risked it all with A-K on a T-8-7 flop, but Yu snap-called with T-7. The turn and river blanked, and Marshall took second. Yu captured the WPT title, prize packages to next year’s WPT500 at Aria and upcoming WPT500 in the UK, and trophies from the WPT and from Aria.