Jersey boy Scott Blumstein, with his parents and throngs of friends cheering him on, etched his name in poker history late Saturday night. The 25-year-old defeated opponents Dan Ott and Benjamin Pollak in three-handed play to capture the game’s most prestigious title and an $8.15 million first-place prize. 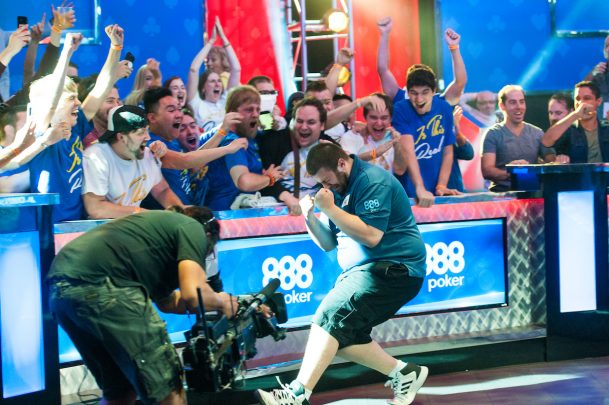 It’s all over, and there was plenty of shouting, as Scott Blumstein’s deuce on the river took it down for $8.15 million at the 2017 World Series of Poker Main Event on Saturday night. (Image: Jayne Furman/pokerphotoarchive.com)

Combining skill, good decision-making, and the always-helpful dollop of luck on his side, Blumstein consistently held the chip lead.  Saturday night’s win capped off the  2017 World Series of Poker (WSOP) Main Event, which began with 7,221 players, and played out for more than 10 days spread over two weeks.

On Thursday, Ben Lamb and Jack Sinclair fell on Day 8, and the following night Damian Salas, Bryan Paccioli, Antoine Saout and John Hesp all followed them out the door.

Blumstein, who looked down at the A♥Q♠ in the big, called to put both his opponents at risk. For a moment, it looked like the Main Event would end in a double elimination for the first time, but Ott managed to pair up on the K♦J♠3♦ flop. Both Blumstein and Pollak picked up straight draws, but neither hit as the 4♣ bricked on the turn, followed by the 6♠ on the river.

The 34-year-old Pollak, the first Frenchman to make the final table since Sylvain Loosli in 2013 (the same year that Pollak finished 27th in the Main Event), was eliminated on the hand and surpassed his $2.9 million in lifetime earnings by taking home $3.5 million for finishing third.

“All your friends here, sweating with you, call[ing] the cards,” Pollak said of his encouraging rail. “I mean that’s insane, insane emotion … I guess in a few days I’ll look back and think ‘yeah, that was the Main Event that was an insane run.’ Over 7,000 players to finish third is insane.”

Scott Blumstein began heads-up play with 232,575,000, nearly 2:1 over Ott’s 128,000,000, and hours later he had his opponent on the ropes. Down to 32 million, Ott got it in with king-nine and doubled after winning a flip against Blumstein’s pocket sixes. Unfortunately for him, a comeback wasn’t in the cards.

On Hand #246 of the final table, after 64 hands of heads-up play, Blumstein limped the button and Ott raised to eight million. Blumstein then moved all in and Ott tanked for a minute before calling off his remaining 55.5 million.

Ott, a poker unknown from Altoona, Pennsylvania, was primed for another double, and he held on the J♠6♠5♥ flop. The 7♥ turn meant all Ott needed to do was dodge a deuce on the river to double, but there was to be no dodging on this night, as the 2♥ spiked on the river to pair Blumstein in an incredible upset.

The 25-year-old Ott, who holds a marketing degree from Penn State University, had just $3,656 in tournament earnings before finishing as runner-up for $4.7 million. That included cashing the $1,000 Tag Team event earlier in the summer alongside his twin brother Dillon.

“I’ll definitely be able to play a lot more tournaments,” Ott said in his post-elimination interview. “I’m going to come back next year for sure. It was an amazing experience. I’ll never pass this up again. Just keep playing, and try to win next time.”

Scott Blumstein, 25, struck it big in his first-ever WSOP event. But while he was a Vegas rookie, he was no stranger to poker, especially in East Coast circles.

“I don’t have an ego in this game,” Scott Blumstein told the media after his win. “I check my ego at the door. Just two weeks ago I was a New Jersey online grinder and nothing has really changed. Having the money, am I going to play a little more live poker? Probably. But I’m probably going to choose where I go based on location and what works for me as opposed to the buy-in of the tournament.”

He continued: “Money doesn’t really motivate me, it doesn’t drive me. I didn’t want to win this thing for the $8 million, but with that being said it’s nice to have some freedom now. The goal was to get to a point where I can do whatever I want to do, and I think I’m going to have that opportunity now whether it’s poker, business, going back to school. I have the freedom to do that now. That’s the American dream in my eyes and finding happiness is part of that. What a good way to get there.”

congrats to all winners