Dr. James Khan, Ph.D., a noted scientist and advocate for primate rights, has been pushing to raise $10,000 via crowdfunding site ChipIn, hoping to get his lab chimp entered in the 2016 World Series of Poker (WSOP) in Las Vegas, Nevada.

Watch the news story on Dr. Khan and Cuddles below.

The advanced degree-educated scientist (as opposed to all those scientists who are only educated to a certain degree) has demonstrated the primate’s ability to count and add up small numbers. He believes that his primate “Cuddles” has what it takes to make it to the final table at the World Series this year, using its mastery of being able to put numbers in order and develop complex strategies, a set of skills that places him in the top 10 percentile of all students worldwide.

Crowdfunding for the Cause

Hoping to broaden the public’s appreciation for the intelligence of primates, Khan hopes to raise the money for his chimp to compete at the highest levels of poker.

Best-known to television viewers as the regular science contributor on “Chimps, Chumps, and Champs,” a popular series that compares the skills of primates to those of both idiots and savants, Khan believes strongly that Cuddles has what it takes to make it to WSOP Final Table.

As is customary, Khan has listed some crowdfunding incentives on Cuddles’ fundraising page, including etiquette lessons for poker players from the chimp, an 8 x 10 photo signed by the primate in zoo poo, and a chance to sit in his cage while he throws the same at the lucky recipient, while the chimp counts and creates complex strategies simultaneously. 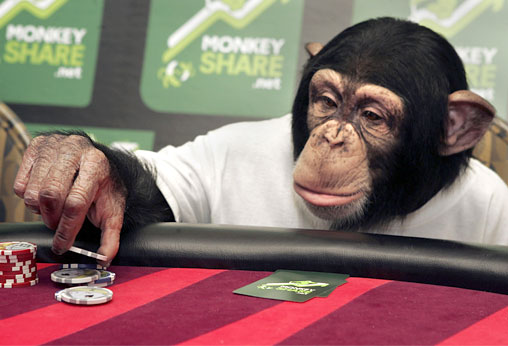 Will Cuddles, the poker-playing primate, make it to the WSOP Main Event Final Table this year? If scientist Dr. James Khan has anything to say about it: yes. (Image: bixpi.blogspot.com)

crazy if a primate made it to the final table. wouldn’t be the first time 😀

I know right Nate? Now we can add monkeys to sharks and fish at the table lol.