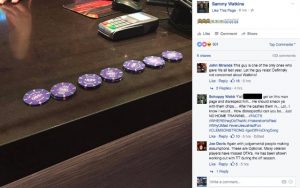 Sammy Watkins has made a mark in the National Football League in just two seasons. He has averaged over 1,000 yards receiving with the Buffalo Bills and scored 15 touchdowns. But his recent off-field decision probably won’t sit well with head coach Rex Ryan.

Watkins, a former Clemson University star and 4th overall pick of the 2014 NFL Draft, skipped a voluntary team workout to play poker in Cherokee, North Carolina. The 22-year old posted a photo on Facebook cashing out $6,500 in chips from the poker room.

Off-season voluntary workouts are self-explanatory…they are voluntary. That means the team doesn’t require a player to show up, but it’s sort of an unwritten rule that players should attend.

Someone as productive on the field as Sammy Watkins may receive a free pass for skipping a voluntary workout, however. If he were, say, Johnny Manziel, the media would likely criticize him for ditching a workout to play poker.

As long as Watkins continues to make big plays for the Bills this coming season, instances such as this won’t be an issue. Coach Ryan has yet to comment on Watkins’ poker habit, nor has the wide receiver mentioned which poker game(s) he played.

The NFL star was in nearby Greenville, South Carolina for a football camp on Sunday. Soon after, he headed over to Harrah’s Cherokee Casino, home of the World Series of Poker National Championship, to get some action.

Watkins isn’t the only athlete who loves to play some cards. Poker is a popular game among athletes while on the road or in the clubhouse.

Alex Rodriguez, one of the greatest baseball players of all-time, albeit an admitted steroid user, has been spotted many times in underground high stakes poker games. A-Rod is an avid card player.

Arguably the best golfer ever, Tiger Woods will be hosting a charity poker tournament in Las Vegas later this month. Tiger is friends with some poker pros including Phil Hellmuth.

NBA star Paul Pierce competes in the WSOP Main Event. In 2014, he made a deep run and drew attention from the sports and poker media. Pierce nearly cashed but was eliminated on Day Three after an impressive run.

On the flip side, a large percentage of poker players enjoy sports and sports betting. High stakes poker superstars such as Phil Hellmuth and Phil Ivey often post comments on Twitter related to sporting events.

Hellmuth is a season ticket holder for his hometown Golden State Warriors. Ivey has been known to wager on sports for huge amounts. He even bets on his own golf game, as do other poker pros.

Sports and poker go hand-in-hand. But some fans, coaches, and teammates may not appreciate Sammy Watkins skipping out on a voluntary workout to hit the felt.