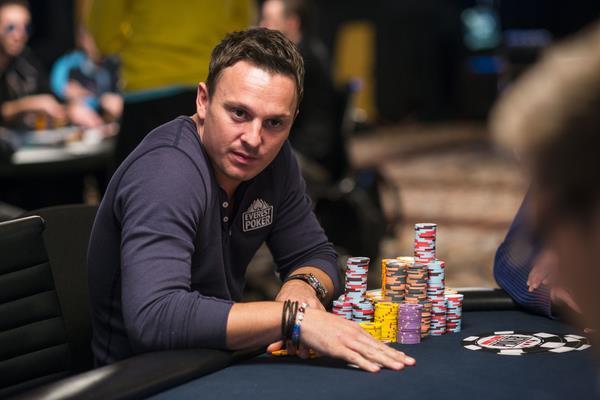 Sam Trickett has amassed $20 million in tournament winnings, but his sponsorship deal with Everest Poker has come to an end. (Photo: WSOP.com)

British poker pro Sam Trickett has apparently reached the summit of his relationship with sponsor Everest Poker, and the two parties are going their separate ways.

The Nottinghamshire-born player signed on the dotted line as ambassador with the BetClic Group site in spring of last year to great fanfare.

Trickett appeared on the poker site in Everest colors and helped promote the site’s various offers. However, reports suggest that with mutual consent, Everest and the player have terminated the deal.

Trickett leads the all-time UK money-earners’ list with a career tournament haul of $20.5 million. The majority of that cash came from his runner-up spot in the WSOP Big One For One Drop tournament in 2012. That year, in the charity’s inaugural $1 million-buy in tournament, Trickett was runner-up to Antonio Esfandiari for an incredible $10.1 million payday.

Big scores both preceded and followed that success, as Trickett took down first the Partouche Poker Tour Main Event in Cannes for a million-Euro first prize and then the Aussie Millions high roller cashes worth $2 million.

Tournament cashes since then have been more modest, as the UK high roller has found comfort in the big cash games of Macau.

Alongside other cash game hotshots like Tom Dwan and Phil Ivey, Trickett has become a regular at the big Macau games. The Brit himself has intimated in the pots that he has been part of, or has at least witnessed, that were in the millions.

Despite his charisma, ease with the media, and formidable poker prowess, major sponsorship deals had previously eluded Trickett. After a relationship with long-time pals Matchbook, he found a new suitor in 2014 in Everest Poker. But that affair, it seems, has proved to be more of a brief fling.

Paying tribute to the UK player, Everest Poker’s Dave Bland told CardsChat: “Sam was the ideal pro for Everest to work with. He’s a pro that cares about the poker public, especially at grass roots.

“His own story was one of a player who moved through the ranks of British poker and now he’s a world beater. We wish him the best of luck and thank him for the hard work he put in representing Everest.”

From Footballer to Poker God

But for a freak leg injury, Sam Trickett might be gracing the turf at Old Trafford for Manchester United, rather than the biggest poker stages in the world.

A promising professional soccer player in his youth, on the radar of several English league clubs, a major injury put an end to Trickett’s sports career. It was in the hospital that a bored and incapacitated Sam discovered online poker, and the rest, as they say, is history.

A propensity to gamble led to early debts, but once he harnessed his natural aggression at the poker table, Trickett was able to start taking down major scores. First, a GUKPT title in England announced Trickett to the stage just two months after hitting his first WSOP final table.

Four years later, he would be gracing the biggest final table of all time, competing against some of the biggest players in the world and fighting for life-changing amounts of cash.

With the $20 million Trickett has accrued over his career, he now sits 6th in the all-time money list, one place ahead of Phil Hellmuth and two spots behind Phil Ivey.

So far, Trickett has been something of a no-show at the WSOP itself, the player tweeting this week that he has “been so busy in the cash games this year. I am starting to miss not playing the WSOP events…”

We feel a “mountains of cash” line coming on.