Sam Soverel had already earned the Purple Jacket at the 2019 Poker Masters before Thursday’s $50,000 No-Limit Hold ’em final table. That wasn’t enough for the talented high roller, however, as he then shipped his second tournament of the series. 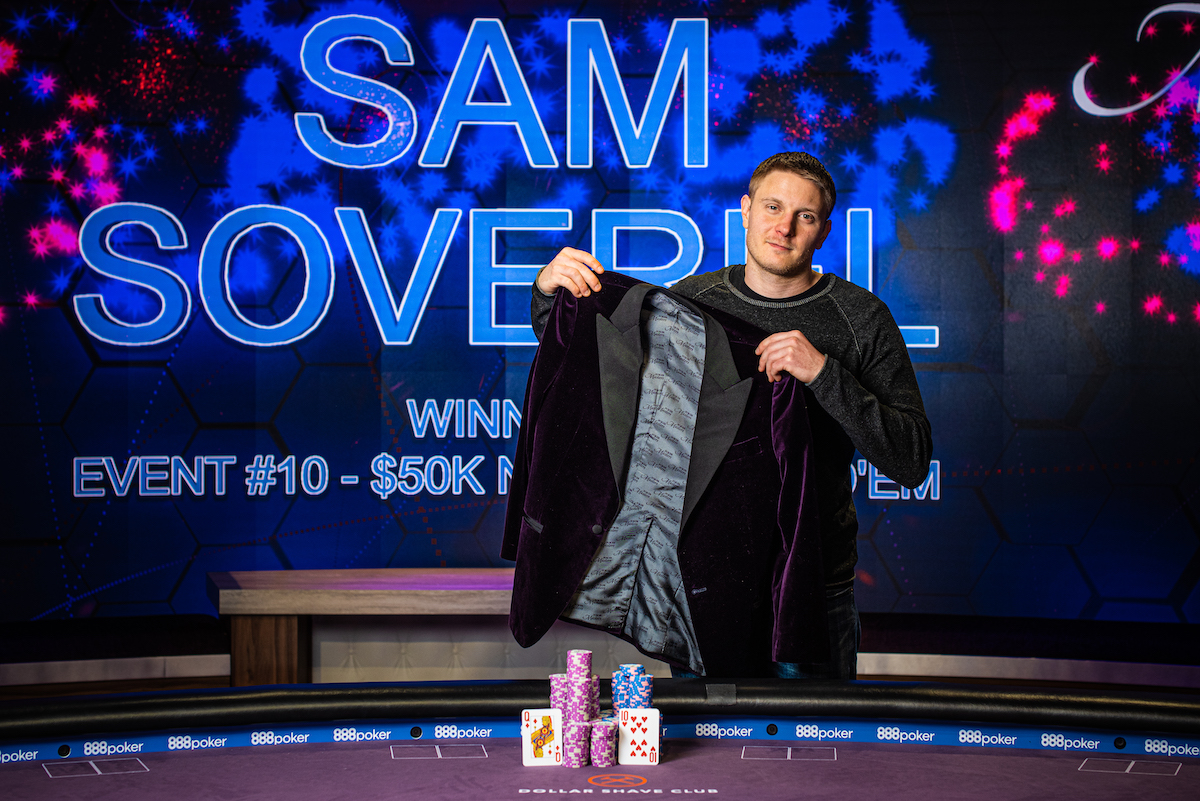 Soverel defeated a field 34 entrants, many of whom are among the best players in the world. He earned $680,000 for his impressive performance, defeating Chris Hunichen heads up. “Big Huni” entered the final table with the chip lead, and played well enough to win, if only he could have won one final race. Instead, he took second place in his only event of the series, good for $442,000.

With six players remaining, Ali Imsirovic had the smallest stack to start the final table on Thursday. With only five being paid, he needed to dodge some early bad luck to avoid busting on the money bubble. That didn’t happen, however, thanks to a fortunate river card for Stephen Chidwick.

Soverel held pocket eights on a flop of 10-6-9, but was up against Chidwick’s suited Q-J and Imsirovic’s A-10. He peeled one off to see the 5c land on the turn, giving Chidwick both flush and open-ended straight draws.

Soverel, sensing he was in bad shape, folded when Ali, the preflop raiser and flop bettor, bet 140,000 on the turn. Chidwick, tanked for a moment before putting his opponent all-in. Imsirovic had a tough decision because, if he were to bust in that spot, he would go home with nothing. Should he move up one more spot, he would be guaranteed at least $136,000.

He couldn’t fold and stuck his entire stack in the pot, only to watch a river 8 give Chidwick a winning straight. Imsirovic was eliminated on the bubble in sixth place, proving once again that poker is a cruel game.

With the money bubble out of the way, Soverel put on a clinic, and won his second title of the series for $680,000. He finished off Hunichen, the runner-up, when his Q-10 beat out pocket deuces to end the tournament.

“Big Huni,” who sat out the other nine Poker Masters events due to an illness, held a big chip lead at one point at the final table. But, Soverel was able to rally, and claim off his second victory and seventh cash in 10 events. He also won Event #7, $25,000 No-Limit Hold ’em, for $340,000.

Soverel had already earned the purple jacket, awarded to the overall series champion, prior to the final table. He entered the day with 810 points, 180 more than second-place Kahle Burns. Burns and Chance Kornuth were still in the hunt for the Poker Masters title when the series finale began. Neither made the final table, which meant Soverel won the jacket in anti-climatic fashion.

Soverel wrapped up the 10-tournament series with $1,396,800 in his seven cashes. He was the only player to hit the $1 million mark.