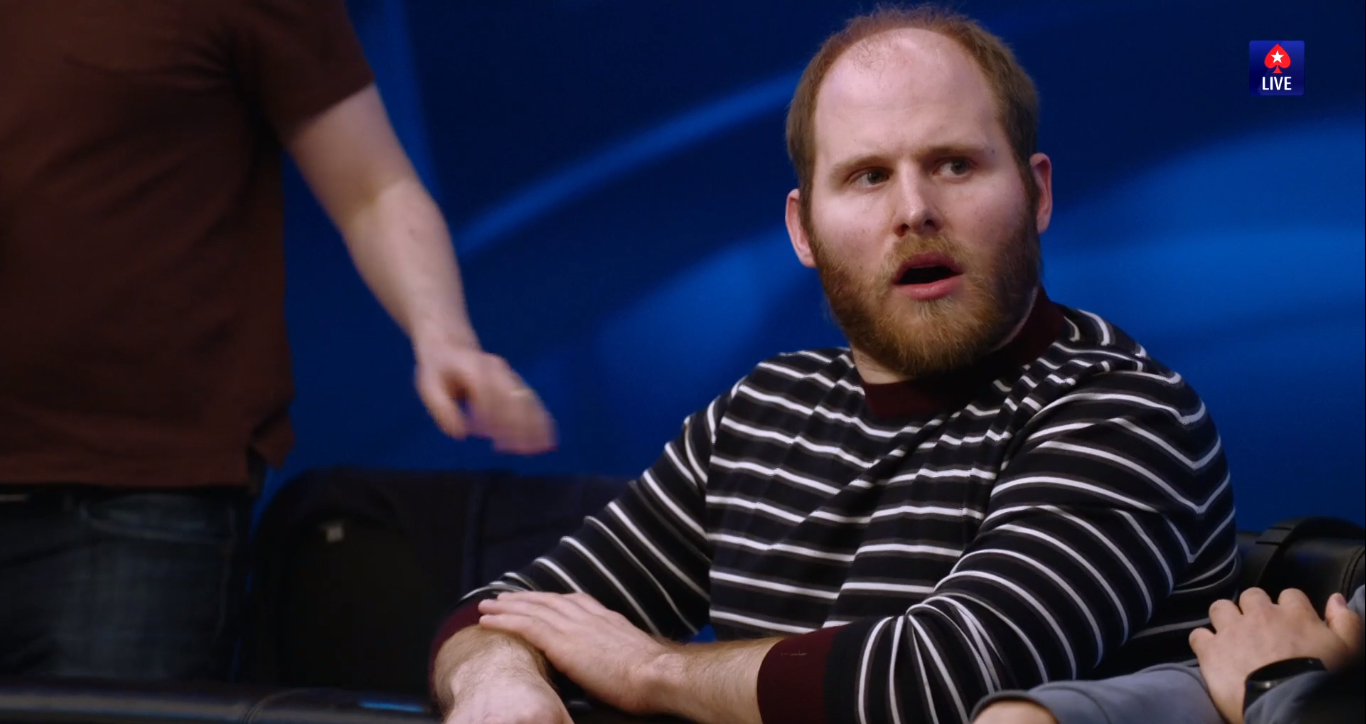 Sam Greenwood rarely looks as confused at the poker table as he did in this pic at the 2019 PCA. (Image: Twitch)

A couple of days earlier, he cashed in the $25,000 PokerStars Players Championship (49th for $69,100). Suffice to say he’s satisfied with his play to start the new year.

At the Super High Roller final table, he was the beneficiary of an ill-timed bluff. Stephen Chidwick, holding ace-high on the river shoved all-in minus one chip, but ran into Greenwood’s nut flush.

What Was He Thinking?

Chidwick’s play was interesting, to say the least. With Steffen Sontheimer sitting at only eight big blinds and eight players remaining, he took a huge risk that didn’t pay off. It’s tough to run a bluff when your opponent is holding the stone-cold nuts.

He was eliminated on the next hand and finished in eighth place ($236,720). Sontheimer laddered up one spot and to earn an additional $65,000.

Chidwick is one of the best players in the world and has over $21 million in lifetime cashes. So, the $65,000 hit isn’t a killer to his bankroll. Sometimes you look like a genius when you bluff, other times it costs you a chance to win a tournament.

Greenwood, however, was thrilled to have induced that bluff. He won a big pot that helped propel him to the second biggest win of his career.

PCA Main Event in the Money

Pierre Calamusa of France was in the chip lead at publishing time with 1,500,000. The tournament drew 865 entries and will pay its winner $1,567,100. If Greenwood, who now has $14.6 million in lifetime cashes, were to pull off another title at the PCA, he’d jump into 34th place on the all-time money list, just ahead of 2015 WSOP Main Event champion Joe McKeehen.

The top 127 players in the PCA Main Event get paid and the tournament was down to its final 79 early Monday morning.

One of the most important hands of the FT was when Greenwood raised J1O fromthe BU when they were3 handed , SB folded and Cortez with QQ just flatted and didn’t reraised . Then a flop 9QK , giving Greenwood the straight and Cortez , who liked the traps/bluffs , now he was the one trapped for real and lost at least 400K$ . I believe Greenwood would have folded with a strong reraise .
Also Kurganov ,very unlucky withhis 1010 vs Hunichen’s 88 , 8 on the turn , 8 on the river quads for Hunichen .
Congratulations to all , especially to Greenwood for the victory and an amazing game .

What a player , he is always present and runs deep. I remember a hand against M.Kanit in $25K Platinum Pass , he block bet turn against Kanit and after the showdown they discussed it a little bit. I was watching this hand live on Twitch , two brilliant poker minds colliding and I was watching cards up.He absolutely deserves it!