Salomon Ponte, who also goes by the handle “Hashtag King”, showed behavior on Poker Night in America Saturday which angered many in the poker world. He insulted some at the table and even dissed Shaun Deeb’s family. Actions have consequences. 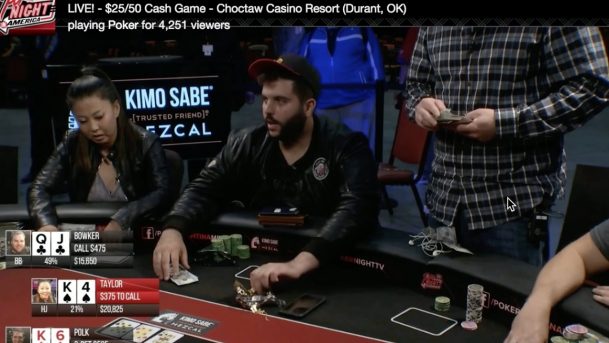 Salomon Ponte, the “Hashtag King,” made a memorable debut on Poker Night in America last weekend, but now some high-profile players are remembering him as less-than-refined. (Image: YouTube)

Ponte’s Twitter account was suspended, players have asked for televised poker shows to never allow him on air again, and much of the game’s community has had enough of his behavior.

Hashtag King is a CPA from Canada, who burst onto the scene in January 2016 after winning a WPT Deepstacks event for just under $345,000.

In recent months, he’s built a social media presence similar to the way Dan Bilzerian did it, but with not quite as stupendous results. He frequently posts pictures of money, promotes his own brand gear, and constantly crows about his own poker skills.

Like Bilzerian, no one has publicly verified Ponte’s poker acumen or bankroll. Other than the recent Deepstacks win, he doesn’t have much on his tournament resume. And his few televised cash game results haven’t been great.

Deeb was the brunt of most of Hashtag King’s insults on the Poker Night in America livestream. He referred to the internet poker star’s sister and wife as “ugly,” and that wasn’t even the worst of it.

Deeb, a regular on televised poker cash games, fired back on Joe Ingram’s Poker Life podcast on Tuesday. He called for a Ponte ban and said he would never appear on any show that gives the brash player a platform.

Live at the Bike has decided to bring the King back for another livestreamed cash game episode. Deeb told Ingram he’ll never appear on the show again as a result. Later, on Twitter, he said he’s going to stick to that boycott.

“kudos to you shaun for doing whats right and keeping some standard in our community are you going to boycott pokernight if they have him on?” @JosephLiberta responded.

You Can’t Bring Me Down

After getting his Twitter account suspended, Ponte re-signed up under a new screen name (@hashtagkingca). He doesn’t appear to be concerned with the negative publicity he’s received recently.

He’s posted numerous videos on Twitter over the past few days. In some, he’s called out certain members of the poker media for unfairly criticizing him. In another, Bellagio security came up to his room to escort him off the premises. Why he got 86’d from the Las Vegas Strip casino is unclear.

Hashtag King has been booted from many casinos over the past few weeks, not just Bellagio. He was also escorted out of Caesars Palace recently. In a Periscope video, two police officers approached his room at another hotel to let him know he would be removed from the property if he didn’t pay for the room immediately.

Ponte told the officers he had already squared things up with the hotel, but they claim his credit card was declined at the time of check-in.

Hashtag King appears to enjoy the attention. He likes to play the “bad boy” role. But, in doing so, must accept the consequences.

This guy is just a horrible human being. You see guys like Tony G and Will Kassouf and you may think they cross the line but then your offered some perspective by this moron. For Tony G and Will Kassouf types they talk for fun and or strategy, this guy just acts like an ass he may think it’s a strategy but it’s not. I wish he could’ve came up with the million dollars to play Doug Polk heads up, it would have been entertaining to see him lose that much money.