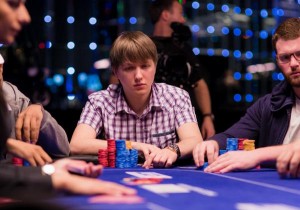 The monster online poker-fest that is Pokerstars’ Spring Championship of Online Poker (SCOOP) has once again broken its own record, awarding a mind-boggling $81,222,158 across 45 events, up almost $5 million from last year. This year’s series boasted 13 tournaments with $1m-plus guarantees and 90 tournaments with $100k-plus guarantees, and events ranged from standard hold’em fair to the more exotic, such as Badugi, 5-Card Omaha Hi/Lo, Single Draw 2-7 and 5-Card Draw.

As always, each SCOOP event was structured with three tiers of buy-in levels (low, medium and high), which meant tournament buy-ins ranged from $5.50 to $21,000, essentially transforming 45 events into 135 tournaments.

The final table was perhaps not as “star-studded” as last year’s, which saw Viktor “Isildur1” Blom defeat Noah Boaken heads-up for the title, but it did include an EPT winner, in Ben “NeverScaredB” Wilinofsky, and a multiple EPT finale tablist, in Martin “M.nosbocaJ” Jacobson.

Many big names went deep in the tournament, only to fall at the last hurdle, including Mike “Timex” McDonald (34th), Phil “RaiseOnce” Ivey (32nd) and Shannon “baseba1b” Shorr (28th).

But when the dust had settled, it was Soshnikov versus the UK’s Peter Akery heads-up for the title, with Soshnikov enjoying a sizeable chip-lead. Akery soon fought his way back when his top pair held against the Russian’s up and down straight draw and flush drawto pretty much level the stacks. Then followed a war of attrition in which the chip-lead swapped back and forth over the next 78 hands.

PokerStars also awards prizes for leaderboard winners across the whole series for each buy-in structure. This year’s top players were Paraguayan player “pantri” who came first in the low buy-in category; UK player Phil “Jackal69” Shaw, in the medium; and Canadian “paulgees81” in the high, while Mexican player “cal42688” was the best player across all buy-ins. Cal42688 wins an EPT Grand Final Package, plus a SCOOP trophy.