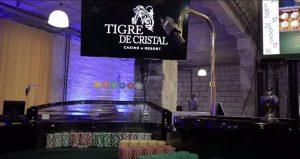 Russia’s anti-gambling stance appears to be weakening thanks to a major casino opening its doors earlier this month.

Although the venue has been operational for a small number of customers since October 8, the official opening took place on November 10.

Welcoming local dignitaries and casino executives, such as Summit Ascent Holdings’ Lawrence Ho Yau Lung, the launch signaled the start of a gambling revolution in the region.

Following a government ban on gambling in 2009, Russia has since allowed four regions to offer casino gambling; Vladivostok being one of them.

A port town bordering the Pacific, Vladivostok is easily accessible for Asian gamblers and it’s hoped the new casino will become a destination for those looking to escape the familiar confines of Las Vegas and Macau.

In addition to Tigre de Cristal, the region will see a host of additional venues pop up in the coming years. According to local officials, $2 billion will be spent on developing the gambling zone in the hopes that it can become the “Las Vegas of the Pacific.”

If all goes to plan, the development phase will come to an end in 2022 and more than 20,000 jobs for locals will have been created by one of the eight casinos, 16 hotels and additional array of leisure venues.

Despite Russia taking something of a militant stance attitude towards to live gambling, the Russian government appears to be slowly warming to the industry.

In addition to four official “gambling zones,” there is talk that Russia may be poised to regulate online gambling.

As it stands, iGaming in Russia operates within something of a grey area. Many players are able to access various online gaming sites from inside Russia; however, the state doesn’t sanction these platforms.

However, earlier this year, it was suggested that online poker revenue could be used to support the chess industry. Being one of Russia’s biggest pastimes, any links to chess is hugely positive and this fact, combined with the government’s views that poker is a mind sport, should help its cause in 2016.

If Amaya’s David Baazov is to be believed, Russia could regulate online poker at some point in 2016. Using his position as head of the largest gaming company in the world, Baazov has been lobbying the Russian government for a number of months and believes a breakthrough is on the horizon.

“In terms of Russia, it’s a dialogue that’s been going on for quite some time. I think that they see poker as a mind sport. The expectation is that they do regulate and issue licenses, as relates to Russia, in 2016,” Baazov explained during Amaya’s recent quarterly earnings report.

come on please…all they care about is what our government cares about…getting their “F’n” cut of the action.