Two recent poker cheating scandals have made the news in the past week, so for today’s Flashback Friday, we look back at the most notorious alleged cheat of them all — Russ Hamilton. The 1994 WSOP Main Event winner was responsible for a $22 million online poker scam from 2004-2008 involving a superuser account that made him nearly impossible to beat. 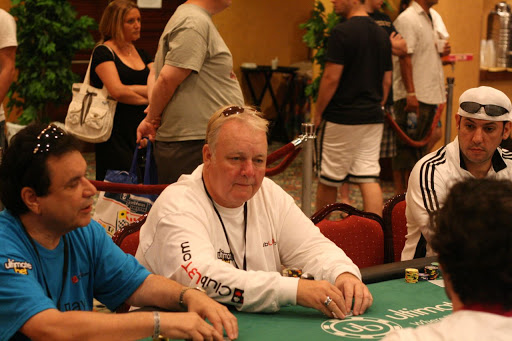 Russ Hamilton never returned to the WSOP after being caught cheating customers out of millions. (Image: rakerace.com)

Hamilton is one of the few past world champs who are no longer remembered for winning the Main Event. That’s what happens when you partake in an elaborate scheme to cheat opponents out of millions.

Last week, Dan Bilzerian accused Dan “Jungleman” Cates of playing under a recreational player’s account in an online poker home game, deceiving other players. Even more recently, Mike Postle made the news. The $10 million lawsuit against the alleged poker cheater was dismissed before trial.

Jungleman and Postle’s alleged incidents pale in comparison to the scheme Russ Hamilton pulled off. But, in the end, he didn’t get away with it. Well, sort of.

Who is Russ Hamilton?

In 1994, Russ Hamilton was on top of the world. He was the world champion that year, winning $1 million, and had also reached two other final tables during the series.

In his mid-30’s at the time, Hamilton was becoming one of the best players in the game. But he took on some roles in the industry away from the felt. And doing so would later lead to his demise.

The former world champ served as a gaming industry expert before working as a consultant for the now defunct Ultimate Bet online poker site. In that position, he helped attract major poker stars to the brand, including Phil Hellmuth, arguably the biggest name in the game.

Hellmuth’s affiliation with Ultimate Bet in the 2000s gave the poker site the face it needed to compete with other major sites such as PokerStars and Full Tilt Poker.

Hamilton also founded the Ultimate Blackjack Tour in 2005 while at Ultimate Bet. The televised blackjack league had some early success, but only lasted two seasons. During his time operating the UBT, he was busy pulling off the most elaborate poker scam in history.

Hamilton did what Postle is accused to have done, times about a hundred. Postle allegedly used some sort of electronic device to gain access to his opponent’s hole cards during Stones Live streams. He supposedly profited around $250,000 in the games in question.

Although similar in style, that is pennies compared to Hamilton’s act. The 1994 poker champion had access to a superuser account at Ultimate Bet that allowed him to view his opponent’s hole cards. He cheated dozens of players out of millions of dollars using a “God Mode” feature.

And we don’t even have to drop the “alleged” tag on Hamilton. He admitted to it all in a secretly record audio clip that was released publicly in 2013.

Hamilton wasn’t the only high-profile player who benefited from the superuser account. He claims Annie Duke, another former UB pro who has since been ostracized from the poker community, regularly used the “God Mode” software. And he also said that Freddy Deeb, once a prominent high-stakes player, was involved.

Hamilton didn’t deny stealing from his opponents, nor did he express any remorse in the secretly recorded clip.

“I did take this money and I’m not trying to make it right, so let’s get that out of the way,” he said.

In 2008, the Kahnawake Gaming Commission said it found convincing evidence that a superuser account was used to cheat unsuspecting players from May 2004 until January 2008. Hamilton was the main person responsible for the fraudulent scheme. However, he never was forced to pay back the money. The poker site, Ultimate Bet, instead returned $22 million to its players.

Hamilton also never spent a day in prison from this scandal. But he’ll never again be welcomed back into the poker community.

I have never played on line poker ; it always seems to be something shady about it. How could supposed to be top professionals be so vunerable; gullible.