Two-time World Series of Poker bracelet winner Loren Klein topped a field of 256 entries las October to win the Run It Up Reno $600 Main Event for $33,970. He returned to the Peppermill Hotel Casino this past weekend to defend his title, and successfully did so against 424 entries. 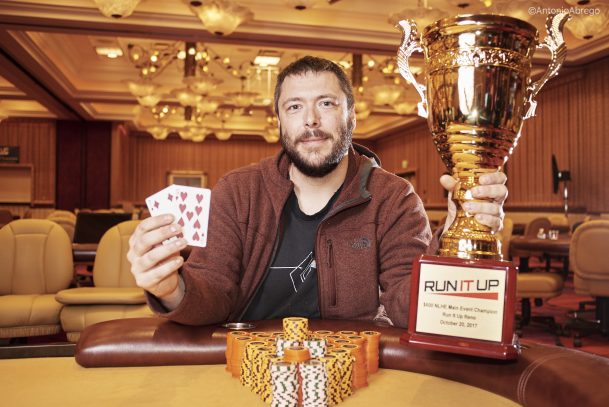 Klein began Day 2 as the overall chip leader, and he maintained a big stack throughout. He eventually made it to three-handed play with a big chip lead over Andrew Cha and Patrick Tardif. After Tardif fell in third place, it only took a few hands for Klein to eliminate Cha.

“It’s always a pleasure to play Run It Up at the Peppermill,” Klein told CardsChat. “Great atmosphere and a fun group of poker players just enjoying the game.”

In addition to the Main Event, Run It Up Reno consisted of a festival of prelims.

“The opportunity to play with my favorite streamers, Survivor celebs, and friends always becomes a priority in my schedule. My favorite event was the Karaoke Night that had over 150 Run It Up warriors drinking, singing, and hanging out.”

Among those to participate were reality TV Survivor stars Tyson Apostol, Adam Klein, Stephen Fishbach, and Rob Cesternino. Both Apostol and Klein previously won $1 million for taking down their respective seasons of Survivor: Blood vs. Water and Survivor: Gen X vs. Millennials.

One of the most exciting stories to rise out of the prelims was Pete Mall’s winning two titles.

First, out of 110 entries, he made it to heads-up play in the $1,100 Thursday Thrilla against Apostol, who held a 4-1 chip lead. Mall battled back for the victory, which came with $17,655 in prize money and a Main Event seat. Apostol earned $11,555 for finishing in second place, while PokerStars Pro and Twitch streamer Jeff Gross finished third for $7,735.

But Mall didn’t stop there, as the next day he won his second title in $125 Stud/Omaha 8 for $2,660. It’s also worth noting he finished fifth in the $125 Partner Event alongside Eric Goldstein. That meant Mall, who had only been in Reno two days, played three tournaments, won two of them, and final tabled the other.

Here’s a look at all those who won titles at the most recent running of Run It Up Reno:

Run It Up will return to the Peppermill in Reno in March.

Wow. That Jesse Fullen from Vegas sounds so smart.