Ronaldo Nazario and Rafa Nadal to PokerStars Duel It Out 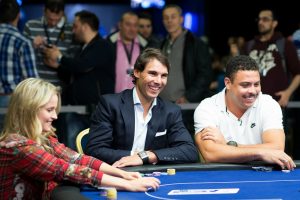 Rafa Nadal and Ronaldo Nazario last met up at the EPT Charity Challenge in 2013; now the duo will play a heads-up PokerStars Duel. (Image: Neil Stoddart/PokerStars)

Ronaldo Nazario and Rafa Nadal are no strangers to challenges in their respective sports, but a recently issued challenge by Ronaldo to Rafa involved a new kind of challenge, which the 14-time Grand Slam tennis champion gladly accepted.

But instead of defending a football goal with a tennis racket, Nadal will face the Brazilian World Cup sensation known as “The Phenomenon” on the poker felt in a PokerStars SportStars match up billed as “The Duel”.

On Thursday, November 6 at 19:00 CET, the two sports legends and poker ambassadors will play heads up for charity in a one-hour live session in London, to be broadcast in real time over the web at PokerStars.tv.

The winner of the contest will receive $50k to be donated to a charity of their choosing, as well as taking home bragging rights, of course.

Rafa and Ronaldo have competed at the poker table before in the PokerStars EPT Charity Challenge in Prague last December, where Nadal emerged the victor over a six-player field of accomplished athletes, with PokerStars Team Pro Daniel Negreanu in the mix to keep them on their toes. Ronaldo exited in fifth during the sit and go, but will be guaranteed at least a second place finish in his second go at Nadal.

“I challenged Rafa to a rematch after finding out he was preparing for another live poker game,” Ronaldo said. “The last time we played together Rafa won the match and it was a lot of fun. This time it will be different, though, because I have been improving on my own poker strategy and will be more prepared.”

Rafa Wants You To Help Him Train

To meet the challenge head on, Nadal has already begun sharpening his game by competing with the PokerStars community in a two-part series called Rafa vs The World Round 2. The first session was a 5/10 heads-up play money skirmish on September 22, in which players met the tennis icon at the Zoom fast-fold tables to throw him every forehand and backhand in the poker book.

Fans and players will have another opportunity to engage Nadal in a repeat session on October 14 at 20:00. PokerStars will again donate $50 to Care International for every hand Rafa wins, while opponents attempt to distract him throughout the one hour round by tweeting questions including #askrafa.

No Show, No Glory

Full Tilt recently promoted a much-anticipated online poker battle as well between Viktor Blom and Gus Hansen, but the latter was tagged as a #NoShow after failing to appear for the match on September 14, in which Jake Cody filled in. While life happens, even to superstars, it is doubtful we’ll see a repeat of no-show drama in November, as Ronaldo seems eager for the rematch, and Nadal is preparing for war at the table.

“It was my first live poker tournament when I last played against Ronaldo and one year later I’m more confident with my skill level,” Nadal said. “I really enjoy playing poker and the challenge of learning as quickly as possible, so I can’t wait to get back into training on my game and to play against Ronaldo.”