Robert Anthony Lay, aka “Tony,” accumulated enough points during the 2016/2017 WSOP Circuit season to earn a spot in the season-ending Global Casino Championship in August. 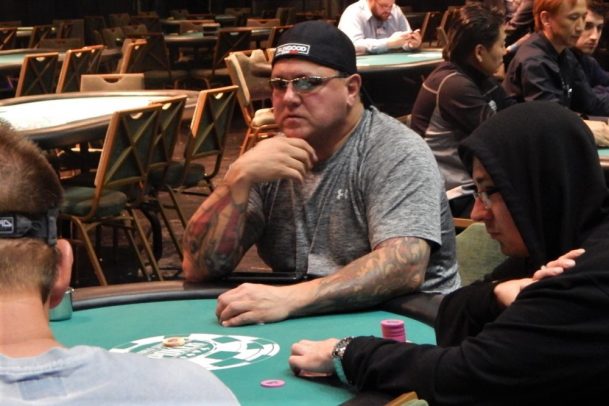 Robert Anthony Lay is suing Caesars for banning him prior to the start of the WSOP Circuit season-ending Global Casino Championship. (Image: pokerfull.net)

But Caesars Entertainment, the owner of the World Series of Poker, banned him from all of its properties for life prior to the start of the event due to a past conviction related to an illegal sports betting operation.

The poker player from Oklahoma, in response to the ban, has filed a $75,000 lawsuit against the Las Vegas-based casino giant for fraud.

He claims Caesars permitted him to compete in Circuit events throughout the year despite knowing his background, and then pulled a bait-and-switch prior to the start of the invite-only Global Casino Championship.

Losing out on an opportunity to get a piece of that pie is part of the reason Lay is suing Caesars.

To play in any WSOP-branded event, a player must submit a Caesars Total Rewards member card when registering. Those who are banned from Caesars properties are ineligible to keep an active rewards account.

That means individuals such as Lay can’t sign-up for WSOP events. He disagrees with the casino’s decision, but Rule 30 in the Total Rewards “Rules and Regulations” form that is signed by each player prior to enrollment makes it clear that Caesars has a right to terminate membership at the casino’s discretion.

“Caesars reserves the right to deny anyone application for membership or terminate anyone’s membership in the Program at any time in its sole discretion without recourse.”

We’ll leave it up to the civil court to determine legality. But Lay’s argument is likely to be he was permitted to play throughout the Circuit season and it’s unfair the casino waited until he was set to be rewarded to impose the ban.

In April 2013, Lay was one of 57 individuals and business entities arrested on charges of operating an illegal sports betting ring. He was part of a bookmaking business that solicited more than $1 billion in bets.

The poker pro never received jail time despite a guilty plea, but was sentenced to probation which he has since completed.

Figuring a guilty plea would look bad to potential employers, Lay decided to embark on a career as a professional poker player. But he’ll have to move his “office” to non-Caesars owned card rooms, unless he wins his lawsuit.

Caesars hasn’t issued a public statement on the matter.

This is just not a smart lawsuit. He signed the rules and regulations form in which it states that the casino has the ability to deny or terminate membership for any reason without recourse. He’s going to lose more than just the lawsuit, he’ll be wasting money on legal fees and lawyers.

it’s silly to argue with bosses. If he wins the ship process this will be an undeniable precedent for the rest of the casino