A video of Rick Salomon got people talking, but this time it wasn’t a sex tape involving Paris Hilton. The Hollywood producer and part-time poker player appeared on “Poker After Dark” Tuesday night, and the fireworks that ensued included a pot of nearly $1 million against relatively unknown high-stakes player Aaron Zang. 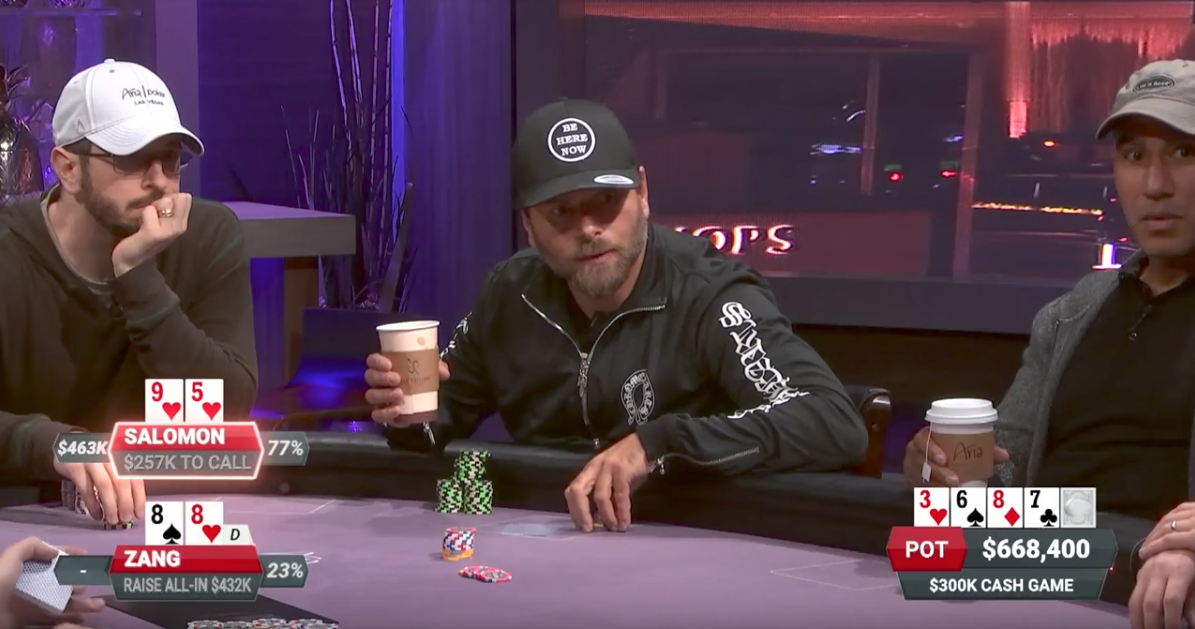 That look on your face when you’re holding second nuts and your opponent responds to your raise by saying “all in,” starring Rick Salomon (center).  (Image: YouTube/Poker Central)

Over at Poker Central, they’re calling this week “Perks of the Trade.” The game was no-limit hold’em, with a $300,000 initial buy-in, the biggest yet for the rebooted “Poker After Dark.” Not surprisingly, this episode generated one of the biggest pots in the show’s history.

The lineup for the week consisted of Bill Perkins, Brian Rast, Haralabos Voulgaris, Phil Galfond, Salomon, and Zang. The label Poker Central is giving the week is a nod to Perkins, who was seated front and center, with Salomon to his right, and Zang off to the side.

In the hand everyone’s talking about, the pre-flop action isn’t exactly clear. But Perkins apparently blind-raised under the gun. Zang held 8♠8♥ and three-bet an unknown amount, as Salomon and Perkins called.

The flop came 3♥6♠8♦. Yahtzee. With top set, Zang bet $15k, and this time only Salomon called, with not much of anything. The former Mr. Pam Anderson was holding the 5♥9♥, which didn’t look too pretty until the 7♣ fell on the turn, giving him a well-disguised straight.

Salomon had shown himself earlier in the session to be highly aggressive, capable of three-barrel bluffing with a wide range of hands. After a minute or so of running calculations or possibly trying to feign weakness or both, Zang moved all-in with his opponent covered.

The video clip Poker Central put up on YouTube cuts out just as Zang starts stacking chips to ship across the table to Salomon, but in that fraction of a second you get a glimpse of a man’s face who briefly believed he was about to win a million dollars, only to have the harsh reality of poker reveal things are actually going the other way.

Salomon may have hit a dream turn card to profit more than $450k in a single hand, but that sort of luck can only hold out for so long.

At the end of the five-hour session, “Poker After Dark” commentator Ali Nejad announced that Salomon was cashing out for $955,000, but there was some dispute about how much he was into the game for, and thus where his fortunes ultimately landed.

Nejad’s math seems to be a little out of whack. Zang was reportedly into the game for $700k, and left with $321k. But the totals seem to add up more logically (in a game billed as one that cost $300,000 to play in) if Zang was only in to the game for $600k, and Salomon was not lying about finishing up not down.

But either way, a five-figure win or loss almost seems inconsequential after a pot like that.

Four of the same players will return Wednesday night at 5 pm PT for another round of $300,000 buy-in cash games for “Poker After Dark on the subscription-based PokerGO app. Doug Polk and Matt Berkey will replace Rast and Galfond.