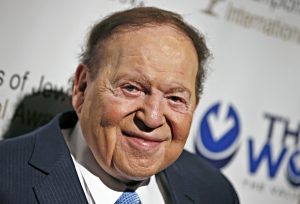 Another journalist at the Review-Journal has decided to leave his position due to Sheldon Adelson gag order. (Image: Newsman.com photo)

Las Vegas Review-Journal columnist John L Smith has resigned from the newspaper in protest at a ban on writing about its new owner, Sheldon Adelson.

Until this week, Smith, who Adelson once attempted to sue for defamation, wrote a popular column in the Review-Journal on issues facing Las Vegas, from human interest stories to politics.

Adelson sued Smith in 2005 over his book Sharks in the Desert. The lawsuit stated that “Smith deceptively manipulates language, quotations, and sources in order to concoct the smear that Adelson had dealings with the Boston Mob when Adelson was in the vending machine business.”

The litigation came at a time when Smith’s daughter was suffering from brain cancer and it forced the writer into bankruptcy. The case was eventually dismissed with prejudice by a US Bankruptcy Court.

Smith’s resignation this week came days after the Review-Journal’s new editor, Keith Moyer, made the ban public knowledge in an interview with the Society of Professional Journalists over the weekend.

“As long as I’m editor, John won’t write about Sheldon Adelson,” said Moyer, who claimed a conflict of interest in light of the past litigation. According to Vegas journalist and broadcaster Jon Ralston, the ban also extends to commentary about Adelson’s pal, Steve Wynn, a man who also sued Smith over a book that alleged mob ties.

Sheldon Adelson, who is determined to prohibit regulated online poker from gaining a foothold in the United States, purchased the newspaper secretly in December last year. The owner’s mystery identity was only eventually revealed by sleuthing from reporters within the newspaper itself.

The fact that a Vegas newspaper’s top columnist was barred from writing about two key figures within the city’s main industry, who between them employ thousands and thousands of Las Vegas residents, raises serious questions about its editorial independence under Adelson’s patronage.

Adelson paid $140 million to buy the newspaper, well over face value, prompting concerns that his motive was merely to buy political influence. Moyer’s predecessor Mike Hengel resigned in the wake of the purchase while the Review-Journal’s longtime gaming reporter Howard Stutz followed him quickly out of the door.

Since Stutz’s departure, the Review Journal’s reporting of the casino industry has been somewhat threadbare; at least for a paper that has always been an important authority on the subject.

“I learned many years ago about the importance of not punching down in weight class,” said Smith, in a resignation letter sent to colleagues, which was shared on social media.

“In Las Vegas, a quintessential company town, it’s the blowhard billionaires and their political toadies who are worth punching. And if you don’t have the freedom to call the political heavyweights to account, then that ‘commentary’ tag isn’t worth the paper on which it’s printed.

“If a Las Vegas columnist is considered ‘conflicted’ because he’s been unsuccessfully sued by two of the most powerful and outspoken players in the gaming industry, then it’s time to move on,” he added.