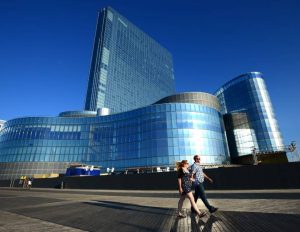 Former Revel Casino in Atlantic City could reopen in 2017 and give poker players a new place to play. (Image: NorthJersey.com/Marko Georgie)

Atlantic City’s Revel Casino could be set for a return to the gaming arena in 2017 with a little help from some former Taj Mahal executives.

Up until now, Atlantic City’s Revel Casino has endured a rollercoaster ride.

When it first opened in 2012 it became the most expensive casino in New Jersey at a cost of $2.4 billion. But, despite its grandeur, the casino found itself in trouble just two years later.

A Tough Time for Atlantic City

With Atlantic City gambling revenue on the slide and two casinos already forced to close in 2014, Revel found itself in a hole it couldn’t get out of.

After declaring Chapter 11 bankruptcy, the venue was saved at the last minute by Florida real estate tycoon, Glenn Straub.

Stepping in with $90 million and a grand plan, Straub was confident he could not only revive the casino’s fortunes, but Atlantic City’s status as a leading gaming destination. Unfortunately, thanks to a combination of union disputes and bureaucracy, Straub hasn’t been able to raise the proverbial phoenix from the ashes.

In fact, with an August showdown with the Casino Reinvestment Development Authority (CRDA) not going his way, Straub came close to cutting his losses and leaving the doors closed for good. Fortunately, for local poker players, the billionaire had a change of heart and a change of name.

Now known as TEN, the venue could be set to reopen as early as the first quarter of 2017 thanks to a new team of executives.

Following the closure of the Trump Taj Mahal in early October, Straub moved to acquire the services of two former senior executives. Frank Leone, the former head of gaming operations at the Taj, is now the senior vice president of casino operations at TEN.

Joining as vice president of hotel operators is Cindi LePine, also from the Taj Mahal, as well as former president of food and beverage at the Florida Hard Rock Hotel & Casino, Vincent Turrano. The appointment of three experienced executives has given Straub and TEN CEO Robert Landino a reason to be optimistic.

Although the venue still has to overcome a number of regulatory hurdles, projections are that a reopening is just a few months away which should be good news for poker players.

Indeed, with PokerStars’ first live Festival event at Resorts attracting the likes of Vanessa Selbst, Jonathan Little and Jason Somerville, there is a chance for New Jersey to become a hub for poker in the US.

Even though TEN doesn’t have a partnership with an online poker room like Resorts does, the complex is more than capable of staging a major event. The 6-million-square-foot venue boasts 13 restaurants, retail outlets, spas and 150,000-square-feet of gaming space, which would be more than enough to keep local and visiting poker players amused.

In fact, were the casino to successfully reopen and partner with a tour such as the WPT, it could provide another world-class tournament destination for players from around the world.

But, for this to happen, the new executives will first have to ensure the casino is ready for action by the start of 2017.

Awesome – can’t wait ’til online poker is legal in U.S. again soon. Keep up the good work, all – never give up – have fun – work hard!