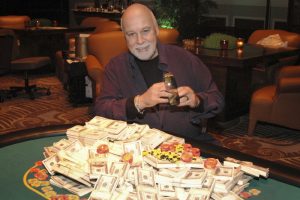 Poker player and the husband of Celine Dion, René Angélil, has died at the age of 73 in Las Vegas. (Image: lapresse.ca)

René Angélil, the husband and manager of celebrated songstress Celine Dion, has died at the age of 73 following a 16-year battle with throat cancer.

He passed away in his Las Vegas home on Thursday following a lengthy battle with the disease that had left him bedridden.

Born in Montreal, Canada in 1942, Angélil wore a number of hats during his life, but he came to public prominence when he helped shape the career of Dion.

After hearing a demo tape of a 12-year-old future star, Angélil did everything in his power, including remortgaging his house to fund her career in the early stages, to ensure she became an internationally renowned performer.

Dion wowed the world with her rendition of “Ne Partez Pas Sans Moi” (Don’t Leave Without Me) at the 1988 Eurovision Song Contest, where she represented Switzerland and ultimately won the competition.

It was not long before she became an international star and later married Angélil, amidst some scandal over their multi-decade age differences.

Alongside his wife, Angélil would appear on red carpet events around the world, but it was Las Vegas where he felt most at home.

For those in the poker community, Angélil was known as a friendly amateur who didn’t mind playing for high stakes inside the Bellagio’s nosebleed cash game epicenter, Bobby’s Room.

Although he also enjoyed other casino games, a passion that would cause some to suggest he had a problematic gambling habit, Angélil became a familiar face to a number of leading poker pros.

While cash games were his main form of entertainment, Angélil could often be found at high profile tournaments across the US. In fact, thanks to a tournament résumé that stretches back to 2004, Angélil managed to bank a total of $750,505 in live earnings during his life.

His last in-the-money finish was back in December 2014 at the $10,400 WPT Five Diamond World Poker Classic in Las Vegas. After lining up alongside 585 other entrants, Angélil managed to outlast the likes of Daniel Negreanu, Jeremy Ausmus, and Dan O’Brien to take home $36,947.

Friendly Force at the Poker Table

As impressive as that result was, the Canadian’s best tournament score came back in 2006 at the Fifth Annual Five Diamond Poker Classic.

After news of Angélil’s death at the age of 73 spread around the world, a number of high profile poker players, including Eric Mizrachi and Barry Greenstein, were moved to tweet their condolences.

@EricMizrachi: Ohhh no, RIP to René Angélil, such a nice guy at the poker table. My heart goes to his family and Celine Dion. Sad.

@barrygreenstein: It’s absurd to use a superlative like “nicest” guy in poker, but Rene was exactly that.

Angélil’s will be laid to rest in his native Montreal at a date yet to be determined. A “celebration of life” ceremony will also be held in Las Vegas, where the couple and their three children have long held a home, later in the year.

Great Men! and his wife always support him. i didnt know he plays poker. RIP.

Thats just depressing and sad :-(. I am older then my wife by a lot and they seemed to have a real love for each other. I wish her the best in this time of sadness and hope she gets through it all ok.