Reid and Heller Look Both Ways in Federal iGaming Fight 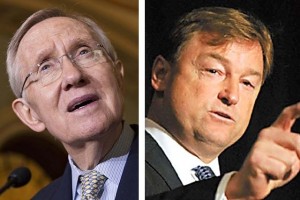 US Senate Majority Leader Harry Reid (D-NV) and Senator Dean Heller (R-NV) have been proponents of online poker legalization in their home state of Nevada, and the games went live in the Silver State in 2013. They are now faced with decisions regarding the new Congressional proposals to prohibit all forms of Internet gambling, bills which were introduced last week by Senator Lindsey Graham (R-SC) and Representative Jason Chaffetz (R-UT).

The bills were introduced to the Senate and House of Representatives for consideration and request the reinstatement of the 1961 Interstate Wire Act to prohibit all forms of online gambling, with the exception of horse racing. The two members of Congress reportedly received campaign contributions and even bill-drafting assistance from Sheldon Adelson’s lobbying group, the Coalition to Stop Internet Gambling. Considering Heller has accepted contributions from Adelson and Reid has supported much of Adelson’s ban effort, each must now decide how to respond to the Congressional movement.

It might seem as if Reid can easily talk his way around the issue of online gambling. He’s made it clear in the past that he supports online poker – only as a game of skill – and opposes other forms of gambling online. However, his support for Adelson’s position to ban some forms of online gambling now has Reid facing the well-funded Las Vegas Sands owner in what could be a Congressional showdown.

Reid must protect the interests of his state and the casinos, but Adelson is part of that equation. Penning an amendment to the current proposed bill for the Senate to include a carve-out for online poker based on its skill classification may be the only way to stay out of a battle that runs deep in campaign contributions and other state funding.

In response to the Graham and Chaffetz bills, Reid said, “We’re going to take it one step at a time.” He then added, “I support the effort of states to decide for themselves whether or not to legalize poker.”

Seemingly wishing to also keep his door ajar for talks with Adelson, Reid included this statement: “Whether you agree or not, I’ve been very impressed with the initial efforts and thoroughness [of Adelson’s team’s work].” He also expressed support for the basis of the new bills in Congress, noting that “a significant expansion of gambling that would bring slot machines to every computer at home in America is bad for Nevada and bad for the country.”

Heller’s issues with the new Congressional proposals run much deeper. Adelson has been a major contributor to and fundraiser for the Republican Heller on his road to Congress, and the Senator will not want to risk losing that type of serious support. However, he has openly supported online poker in Nevada, as well as in other states. The Adelson-backed bills in Congress fly in the face of that and seek to outlaw all Internet games, as well as refuse to acknowledge grandfather clauses for states like Nevada that have already legalized a form of Internet gambling.

Heller may decide to campaign for the online poker carve-out alongside Reid, via an amendment to the current bills. He may want to tread lightly, however, so as not to run afoul of Adelson.

When asked for a comment by reporters prior to last week’s introduction, Heller said, “Get the bill out there first, take a look at it, see what it does.” He also noted that everyone won’t agree on a topic such as online gambling, “but everyone has an opinion.”

Both Senators will likely discuss options in the coming weeks. While some feel that the Graham and Chaffetz bills won’t gain much traction in Congress, Adelson is staking millions of dollars on the idea that they will. Reid and Heller are going to have to take action in some form if that is the case.

What do we want? A CARVE-OUT FOR POKER. When do we want it? YESTERDAY.