The Regional Poker Scene in 2017: How the Midwest Was Won

Mid-tier poker tours are often overshadowed by majors such as the World Poker Tour and World Series of Poker. But this year, regional poker tours like the Mid-States Poker Tour showed just why they should be taken seriously. 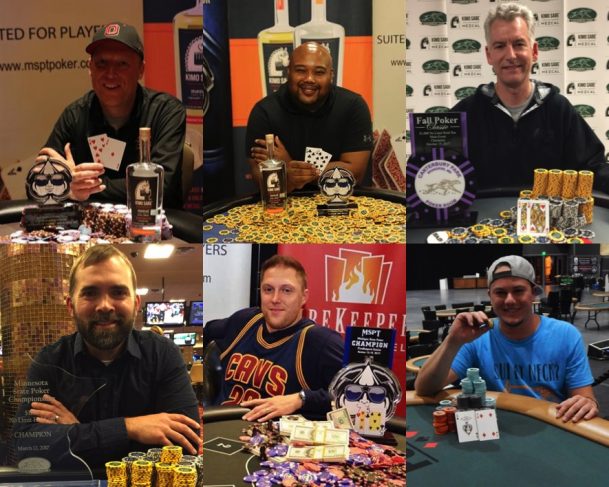 From Colorado to Iowa, and Minnesota to Michigan, poker records were set across the Midwest in 2017 thanks in no small part to tours like the MSPT. (Image: Canterbury Park, Horseshoe Hammond)

In 2017, the MSPT set new records in several states. In March, the tour set the record for largest poker tournament attendance in Colorado history, with 893 entrants taking part in a $350 Regional Event at Golden Gates Casino.

By May, the MSPT FireKeepers had become the largest poker tournament, in terms of both prize pool and attendance, in Michigan history with 1,066 entries. (This also set a record for MSPT tournaments outside of Las Vegas.) This resulted in a record win by a single player in October when Chris Meyers captured a $191,196 first-place prize.

These tournaments offered back-to-back $1,000,000+ prize pools in the Midwest.

The week before that, the $350 buy-in MSPT Regional Poker Event in Milwaukee’s Potawatomi Casino attracted 1,658 runners in three flights, which made it the largest poker tournament ever held in Wisconsin. The previous record was 1,272 entries set by the World Series of Poker Circuit in four flights back in February. Local attorney Matthew Vignali took home $70,240 for winning that event.

In August, the MSPT $350 Regional Poker Event at Canterbury Park became the biggest tournament by attendance in Minnesota poker history with 1,169 entrants over four starting flights. That bested the previous state record of 1,114 entries in Canterbury’s 2015 $115 buy-in Ultimate $100K, which was set in eight flights. Paul Cross won for $61,911.

But even with all this tournament success across the Midwest, the MSPT still enjoys the occasional jaunt to Las Vegas. And at this past summer’s MSPT Venetian, the regional tour drew 3,273 entries, which made it the the largest poker tournament in both MSPT and Venetian history.

The Midwest also played host to several other regional poker tours and events throughout the year. For example, Horseshoe Hammond hosted the annual Chicago Poker Classic in March, and saw such players as Jake Hommen, Shawn Rice, and Stephanie Chung claim titles. However, it was Lance Howard who bested a field of 651 entries to win the $2,000 CPC Main Event for $231,237.

Ben Zamani continued his hot streak in September by beating out a 926-entry field to win the 2017 River Poker Series $2,500 Main Event at WinStar World Casino in Thackerville, Oklahoma. The reigning WPT Player of the Year earned $347,134 for the victory.

In early October, Canterbury Park also hosted the Fall Poker Classic, a festival that dates back to 2001. Dennis Stevermer topped a field of 375 entries to win the 2017 FPC Main Event for $72,762 after a heads-up deal with Todd Melander.

This year, you might want to add stops in the Midwest to your tournament schedule.

Regional and Local events appear to be taking off with players happy to stay closer to home for smaller prizes than travel to big events with big payouts and prestige. However prestige is not everything as some regional events are turning in some huge guaranteed payouts. A number of poker sites seem to be recognising this and offering micro satellites in which entry can be gained to less prestigious events but still with big payouts. Take a look at your local events and try and get entry….. you may find you can win a lot of money!