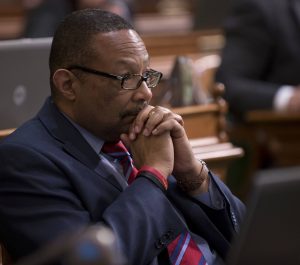 Assemblyman Reggie Jones-Sawyer’s AB 167 bill to regulate online poker in California looks like it will be joining Mike Gatto’s AB 9 on the shelf.

Both bills were crossed of the agenda of a scheduled hearing on Wednesday.

While Gatto announced last week that he was officially pulling the plug on AB 9, Jones-Sawyer has yet to make an official statement on the fate of AB 167, but now with no hearing planned and time dwindling, plus outright rejection from the Pechanga Coalition, it looks like it, too, has bitten the dust.

Jones-Sawyer’s efforts, with Senator Lou Correa, to legalize and regulate online poker in 2014 met a similar fate. Last year’s bill included a strong non-severable bad actor clause, and would have excluded PokerStars and the racetracks from a California online poker market.

It was broadly supported by a coalition of 13 tribal operators, with only the Morongo tribe and the state’s biggest card clubs refusing to endorse it. The Morongos and the card clubs had inked a deal with PokerStars to offer online poker in the event of regulation.

Jones-Sawyer shelved that bill, promising he would submit a rethought bill in 2015, and hinted that the bad actor language would have to be tempered to have a chance of passing.

Thus, AB 167 took a different approach; it was light on bad actor language and open to the inclusion of the racetracks. Naturally, the Pechanga coalition hated it.

The coalition wrote to Jones-Sawyer in March. “The Tribal Governments shown on this letter,” it said, “write to advise you of our united opposition to your Assembly Bill 167 and any legislation that would expand the scope of gaming in California to grant internet poker licenses to horse racing associations or which would ease regulatory standards to accommodate actors whose past behavior and tainted brands and assets would erode the integrity of intrastate internet poker under consideration.”

Meanwhile, Gatto, who said the aim of AB 9 had been to find “consensus,” admitted defeat last on July 1. He emphasized, however, that that his bill contained an “urgency clause” and so can be resuscitated at any time.

“Over the past three years, I have met with representatives from nearly every software provider, card room, gaming tribe, racetrack, and internet-poker operator who has an opinion on the subject,” he said. “I gave my word to both supporters and opponents of AB 9 that my goal was consensus, and that I would not move forward with anything that achieved less than that.”

Hopes now rest on Senator Isadore Hall’s bill, which also contains an urgency clause, although in the current climate it remains a serious long shot.