Is It Time to Get Rid of Unlimited Re-Entry Tournaments? (Op-Ed)

Daniel Negreanu said earlier this month that he’s considering firing just one bullet in all poker tournaments he plays in 2020. He wants to go back to the old days when freezeouts reigned supreme, and a single buy-in was the only shot all players got. 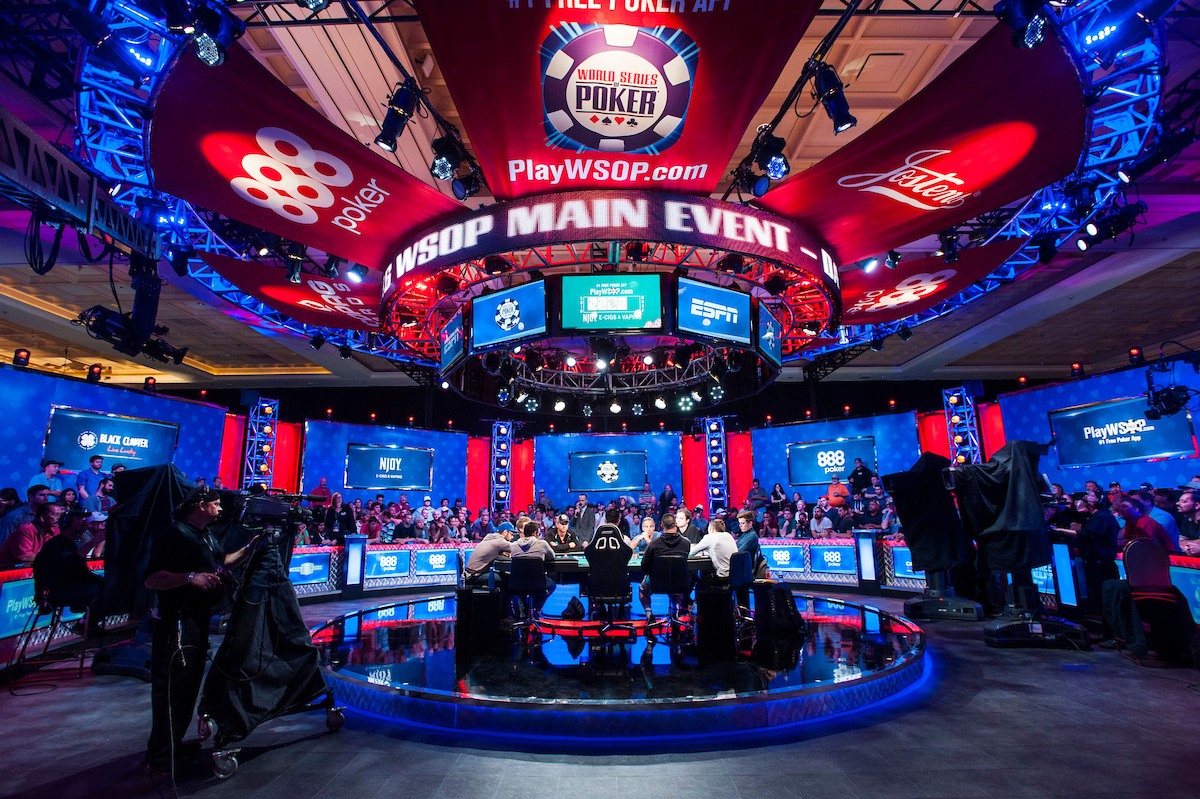 Poker tournaments such as the WSOP Main Event are rare freezeouts these days. (Image: WSOP)

The problem, as he sees it, is that unlimited re-entry tournaments give players with a massive bankroll a tremendous advantage — even at prestigious events such as the WPT Five Diamond World Poker Classic, which kicked off Monday at Bellagio in Las Vegas.

In this event, which culminates in a six-handed televised final table on Saturday, players have until the end of level 12 — halfway into Day 2 — to keep ponying up $10,400 for a new seat card and fresh stack of chips.

Social media suggests that many players concur with Negreanu, and that it’s time for tournament directors to scrap the unlimited re-entry format altogether, or limit each player to a single second chance.

(Note: Re-entry is slightly different than rebuy. In a rebuy tournament, you keep the same seat, whereas in a re-entry, you start over as a brand new player. The WSOP eliminated rebuy events in 2008. The WPT Five Diamond made its tournaments all unlimited re-entry in 2012.)

I’m not much of a tournament player beyond the occasional low-stakes throwdown. But I do follow the “major” events closely, as both a fan of the game and a poker news writer, and thus have some strong opinions on the matter. I also interviewed a few well-known poker personalities to get their take. And in some ways, I agree with them all.

Mid-stakes tournament grinder Allen Kessler, for example, mostly agrees with Negreanu, opposing unlimited re-entry. Yet he says he’ll no longer play in the WPT Five Diamond, despite its prestige, and didn’t buy in this year. He acknowledged how a freezeout format could cause trouble for traveling tournament pros.

“Someone who travels cross-country to play the Bellagio Five Diamond should get one more shot if they suffer a bad beat,” Kessler explained to CardsChat. “One re-entry is the best option.”

He makes a valid point. Imagine spending $1,000 for a flight from London to Las Vegas for the Five Diamond, only to run kings into aces a half hour into the tournament. You’d probably want to re-buy … but what if that weren’t an option?

Over the years, Kessler has sparred with WPT Executive Tour Director Matt Savage, who began championing re-entry events nearly a decade ago (and who more recently blocked Kessler on Twitter.)

Not that anyone will care; but the results of this poll regarding $10k @wpt 5 Diamond are fairly revealing.

Someone should forward this to @BellagioPoker and @SavagePoker since they both chose to block me; rather than discuss this. pic.twitter.com/mAxVj42FsG

Kessler argues that those who have massive bankrolls have an unfair advantage in these events. If they bust, it’s no big deal. They just fire another bullet. “Players are not on an even playing field,” he said.

I mostly agree with the Chainsaw on that take. But I’d also argue that the less richly bankrolled players can take advantage of the wealthy pros early in a tournament if they pick up a big hand.

That was Matt Affleck’s take. “Lots of the value in Bellagio 5D is how bad everyone plays early in the re-entry period. I thank you for your self admitted generosity,” @McMattoPoker said.

Kessler ran a Twitter poll earlier this month asking for thoughts on unlimited re-entry at the WPT Five Diamond. Most (61%) didn’t take a position, but 18% of respondents said they weren’t playing because of late registration and re-entry rules. (11% were playing despite their opposition to the policy.)

“Unlimited re-entry in a $10,000 buy-in through mid-Day Two with 20 big blinds creates a tourney of the ‘haves’ and ‘have-not’s,” Kessler explained.

He believes that the Five Diamond “would have similar numbers with” a re-entry cap. Last year’s tournament, won by Dylan Linde for $1.6 million, saw a record 1,001 entries. From how many entrants, however, is not immediately clear.

I like Kessler’s idea to limit tournaments to a maximum of one re-entry, but I disagree that major tournaments like the WPT Five Diamond would have as many entries without unlimited re-entry.

But some numbers don’t lie. This Five Diamond has seen an increase in players every year since 2012, the year the tournament abandoned a freezeout format. It’s hard to imagine how limiting entries wouldn’t also limit the prize pool.

One Step Forward, Two Steps Back?

ESPN’s Norman Chad is a strong proponents for a return to freezeouts. He’s ranted numerous times recently that unlimited re-entry poker tournaments should be, as he likes to say, whamboozled.

He makes a solid case, but I believe he’s gone to the extreme.

He’s right, if a team loses in the first round of the NFL Playoffs, that’s it, their season is over — they can’t buy back in and get to re-kick a field goal or start a different quarterback. But he understands the challenges of banning re-entry completely.

“It’s hard to put the genie back into the bottle, particularly when the genie has gained weight,” Chad said. “But we can try.”

Re-entry in poker was one step forward, two steps backward.

What type of competition encourages you to get eliminated because you are not actually eliminated?

What type of competition gives certain entrants multiple chances to win but most entrants only one chance to win?

That right there is the biggest issue. Scrapping all unlimited re-entry tournaments at this point would be a bit like shutting down the Internet. We’re just too used to this format in tournament poker. With that said, I do wish tournament operators had never let unlimited re-entries become the professional standard. But there’s no going back now.

Seth Palansky, vice president of corporate communications for Caesars Interactive and the WSOP, agrees that the “pendulum has swung too far” when it comes to unlimited re-entry tournaments. He also reminded me that there were many positives to allowing players to fire multiple bullets.

“Re-entry quickly became popular in the industry because it seemed to be offering a win-win scenario for players and operators,” Palansky said. “Prize pools could swell without the need to bring in more physical players, and operators had a way to pay for the increased labor costs as a result of providing better value in the tournament.”

He also advised me that re-entry made operators such as the WSOP “feel comfortable with prize pool guarantees as well as convince players to travel to events, knowing they wouldn’t suffer a bad beat and be stuck with sunken expenses making the trip.”

Lots of the value in Bellagio 5D is how bad everyone plays early in the re entry period. I thank you for your self admitted generosity. I always prefer freeze outs but also don’t mind re entries because of above. And I don’t mass fire.

Palansky agrees there are too many unlimited re-entry poker tournaments these days. He argues that “it’s important that everyone who enters an event has a fair chance to win that event.” But he also believes “we have struck the right balance” at the WSOP.

Last summer, of the 89 bracelet events, 40 had no re-entry, 31 offered a single re-entry, seven online events capped re-entries at three, four offered one per flight, and only seven tournaments went with the unlimited option.

I agree with Palansky that there’s room for a balance of tournament structure options. I also agree with Negreanu that the current abundance of unlimited re-entry events might have gotten out of control.

Old-school pro Dan Heimiller made a good point on Twitter when he asked Negreanu, “Have you ever considered that rebuy tournaments are fun? Can’t be too opinionated on stuff that’s fun.” (2 likes.)

But most took Negreanu’s side, including 2011 WSOP Player of the Year Frank Kassela, who suggested, “We should just all ban together on this one. No re-entry in any event in 2020” (20 likes.)

Interesting idea by Kassela, but such anti-re-entry sentiment and solidarity might have to wait for next year.

On Monday, at the 2019 WPT Five Diamond, Negreanu said he ran card dead and was never able to play a big pot. He busted out on Day 1.

Then, after some hemming and hawing on Twitter, he re-entered on Tuesday, Day 2.

I agree that a lot more of the bigger tournaments should be traditional or maybe 1 re-entry but also feel that something for everyone is still a good thing,as always too much of a good thing becomes a bad thing.I like the kind words of Negreanu here.I think if players use correct bankroll management it would see them playing the right level buy-ins and not punching above their weight so really its still an even playing field in my mind and accomplished professionals like Daniel have no need to feel guilty about not so pro players choosing to play those tournaments yet fully agree with his choice of words “hurt the amatuers experience”.That hits the nail on the head.

It’s only when you read about it do you really get time to stop and think about this issue.

So, you get another chance to join the game if you bust out. What’s so wrong with that? I’ll tell you what’s wrong with it…… it promotes a number of unwelcome behaviours in society and directly to the poker table, however some of them do have distinct advantages across the table of entrants.
If you can afford it, you can of course buy back into the game. This will no doubt impact on how you play in the first instance, maybe become looser and have wider ranges and therefore become a good target for opponents who have cottoned onto the fact that you will simply buy back in if you bust out. Those other players will gratefully take you to the cleaners! However, this does promote an unequal society at the table. Some players won’t be able to buy back in so will be playing (maybe, and maybe wrongly) to make the most of their hard earned buy in and be protective of it. This leaves them vulnerable.

As for operators, well, it’s a win win situation for them. Giving players additional chances only means one thing for them….more money. It’s going to be hard to move them away from this little earner.

So, a tricky one with winners and loser everywhere. For me, it should be one chance and out. But what do I know eh?

Words of poker amateur and afficianado; I hate the re-entry tournaments and wish they hadn`t ever came about. I believe they should have never been brought into the picture as a poker player I learned early on in, the goal is to play against weaker opposition. Re-entries have allowed the weaker opposition ( lower bankroll) to steer clear or perhaps late register to avoid the non-sense. All this hoopla of re-entry and rebuys should be left for charity tourneys “with a good cause to raise money“ I truly believe going back to the freezout format would bring back some value and stature to the game I once loved and cherished.
Melissa