A search for Raymond Avant on Hendon Mob and other online databases yields no results. But while Avant’s poker past is currently unknown, his future will include the title “WSOP bracelet winner” after he took down first place in the $500 No-Limit Hold’em Knockout Freezeout event. 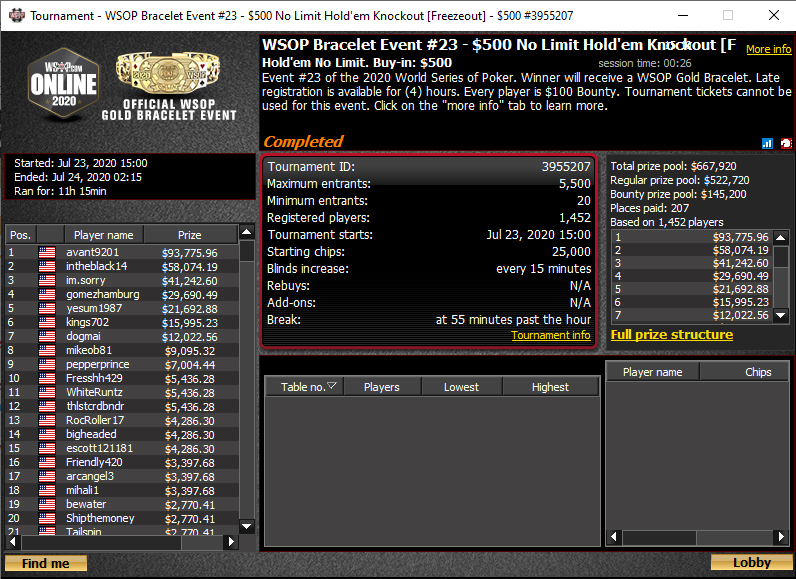 Raymond Avant came out on top of a 1,452-player field to win a WSOP Bracelet. (Image: Screenshot)

Avant (Avant9201) entered the final table with the chip lead and never gave it up, outlasting runner-up Scott Epstein (intheblack14), Ryan Torgersen (Im.Sorry), and Upeshka De Silva (gomezhamburg) en route to a $95,476 payday and his first WSOP bracelet. De Silva was the most accomplished player at the final table as a two-time WSOP bracelet winner with more than $3 million in career poker tournament earnings.

Robert Kuhn and Ryan Torgersen Battling For the Top Spot

But Torgersen may have closed the gap with his third-place finish. With a win and a runner-up finish already on his resume this summer, another top-three finish will put Torgersen right in the mix for the top spot. Both players are likely anxiously awaiting the WSOP.com leaderboard update, but regardless of what position they are in heading into Friday’s $400 No-Limit Hold’em 8-Handed event, it figures to be a neck-and-neck race down the stretch.

Negreanu reportedly has $1 million in bracelet bets placed against other players in this series, including Connor Drinan (666666), who he’s had a few deep runs against. Eight events remain for Negreanu to break through in the WSOP Online Series before he makes his way to Mexico to play in the GG Poker bracelet events.