Ramon Colillas went from $0 to $5.1 million by turning his free Platinum Pass into a tournament victory in the inaugural PokerStars Players Championship. 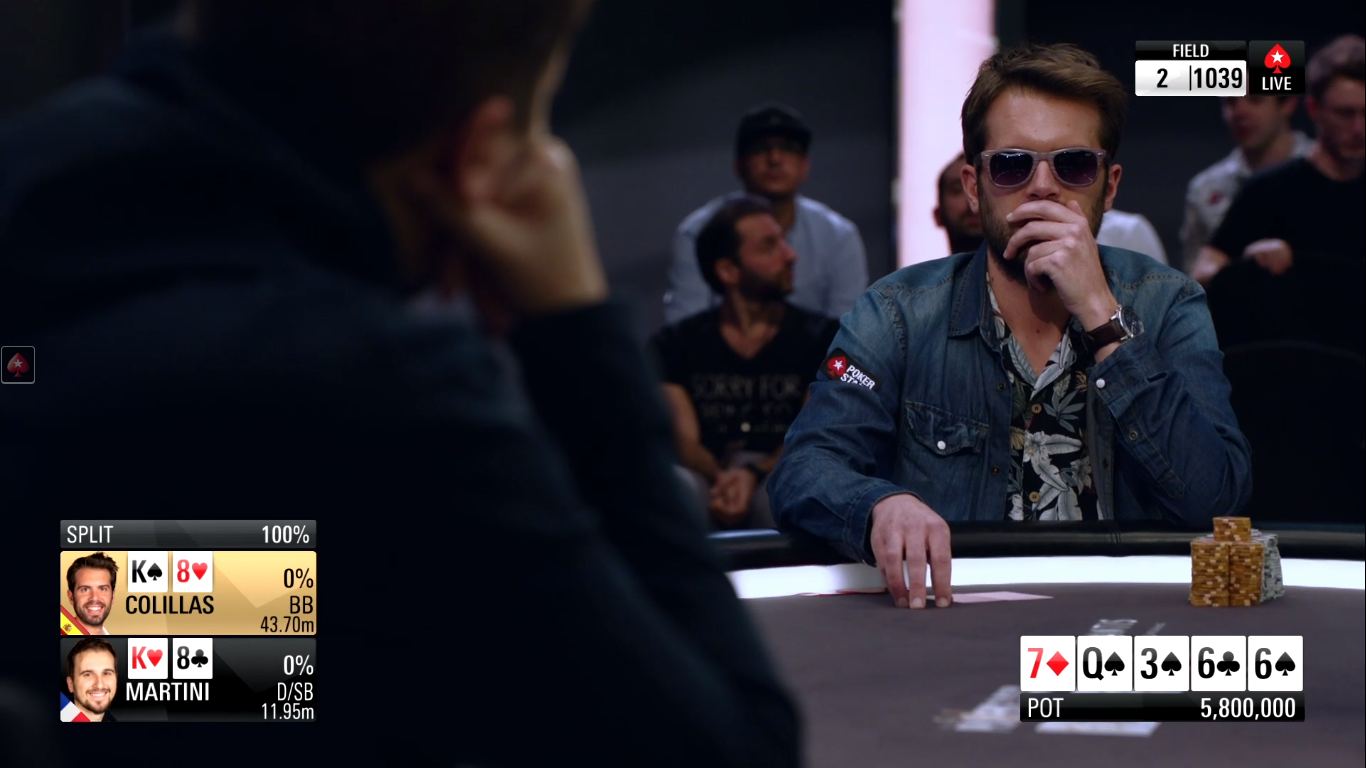 Ramon Colillas of Spain won the PokerStars Players Championship for $5.1 million, which is more than he ever could have dreamed of winning. (Image: Twitch)

Julien Martini finished runner-up and also received life-changing money ($2.97 million). Early on at the final table, he was pretty much invincible. He began the session third in chips out of eight on Thursday, but had some serious run good to take a massive chip lead.

It all started when Martini cracked pocket aces with A-Q to bust Talal Shakerchi (eighth for $509,000) early in the day.

Shakerchi was probably disappointed that a bad beat cost him an opportunity to win millions. Well, right up until he remembered that he has hundreds of millions of dollars in the bank already. Talal is a regular on the high roller circuit but made his money in the investment management industry.

The rest of the players at the final table, however, could use the money. Most of them are low-stakes grinders or amateurs. This was a once-in-a-lifetime experience, and they certainly made the most of it, especially Colillas.

A total of 320 individuals won a Platinum Pass from PokerStars into the PSPC. They accounted for about one-third of the 1,039-player field. That included our very own Jacki Burkhart and Arlie Shaban, who famously earned his pass for completing 12 difficult challenges.

Fittingly, one of those Platinum Pass winners ended up as champion. Colillas, who hails from Spain, had just $10,873 in career live tournament cashes before this one. That isn’t enough money to buy a pontoon boat. Now he can afford to purchase a yacht.

While Martini was crushing everyone else at the table, Colillas was slowly building his stack waiting for an opportunity to double-up through the chip leader. And he finally found a spot thanks to a lucky runner-runner to hit a full house against a flopped flush. After that moment, it was never a contest.

During heads-up play, Martini won a race but still only had a fraction of his opponent’s stack. On the ensuing hand, he shoved with suited J-9 and was called by a slightly better hand, A-5. This near coin flip situation didn’t go his way. But on a positive note, he’s now rich.

Afterwards, PokerStars ambassador Chris Moneymaker, who became the face of this event a year ago, approached Colillas.

The build-up for the PSPC was about as intense as any tournament in recent history, if ever. PokerStars began hyping the tournament more than a year ago.

All across the globe, lucky winners scooped Platinum Passes valued at $30,000 throughout the year. Before registration closed on Monday morning, it became the largest $25,000 buy-in event ever.

The seats were filled by a unique mix of celebrities, poker superstars, low-stakes grinders, and amateurs. Skateboarding legend Tony Hawk, comedian Norm Macdonald, and UFC announcer Bruce Buffer were among the celebs in attendance. On the poker side, poker royalty such as Phil Hellmuth and Daniel Negreanu made the trip to the Bahamas for this historic event.

But in the end it was the unknowns who are no longer unknowns winning big in the inaugural PSPC.

That hand for Colillas who first called the pot bet on the turn , taking maybe a tournament life risk , but the 5 on the river gave him the boat (QQQ55) beating his opponent’s flush , who’s shoved was now called ofcourse by the happy Colillas , made Martini depressed and his mind control collapsed .

He started making loose bets and bluffs , couldn’t hide his great disappointment , giving tells to the opponent like in the overbet to the pot with 63s bluff with air he tried to make on a board Kd4hKh7h9d , but Colillas read his bets and body language and called him only with Ace high on the river (AQo) . I believe the J9s shove was also loose because he was tilted , he could wait for better hands .

Anyway , congratulations to Martini for the second place ,3M is not bad at all , but most of all to platinum pass winner Colillas for his 5.1M victory 🙂

WOW that’s a dream prize, I saw a couple of plays live and I did not see a good poker, I saw many bad plays, the Colombian player saw him pay an allin with 22, I think it was a bad move and so I saw many other bad plays, but the most striking were the incredible prize, I hope someday play a tournament like that