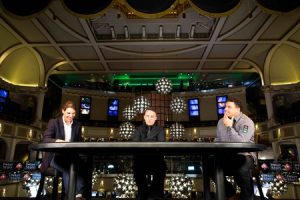 Rafa Nadal defeated Brazilian soccer star Ronaldo in a charity poker match organized by PokerStars, winning $50,000 for his charitable cause, the Rafa Nadal Foundation. Nadal emerged victorious at the end of a 20-minute session that tied up with one last attempt by Ronaldo to snatch victory from the tennis great.

The match was held at the Hippodrome Casino in London on Wednesday, and featured two major sports stars that have helped promote the PokerStars brand in their respective markets: Nadal in Spain, and Ronaldo in Brazil and throughout the soccer world.

The match had very simple rules: the two would play for 20 minutes, and at the end, whoever had the most chips would win the cash for their charity of choice.

The two exchanged a series of small pots over the course of the match, with neither player being able to gain a decisive lead. Nadal picked up a small lead in the early going, but Ronaldo had been able to make up most of that ground by the time the final hand was scheduled.

Given that the match was winner-take-all, that made an all-in confrontation on the final hand very likely. Ronaldo was the one to shove his chips in first, but Nadal quickly called after checking his cards. The tennis champion was well ahead once the cards were revealed, holding AT of hearts against Ronaldo’s Q7 of spades. Nadal’s hand held up, giving him the final advantage and earning the prize money for his charity.

For Nadal, a 14-time Grand Slam winner, poker is a relatively new obsession. The tennis star had very little experience with the game when PokerStars first signed him as an ambassador for Spain’s newly regulated online gambling market, but has picked up the game fairly quickly since then.

“I had a great coach,” said Nadal. “He gave me the opportunity to learn more about the poker game. It really helped me a lot. When you learn more and more about this game, you enjoy playing it more. You understand that it’s not a game of luck. There is luck in some moments, but in general the best players will win.”

Ronaldo (the original, rather than Portuguese superstar Cristiano Ronaldo) has a much longer history with poker. He says he learned the game while traveling the world as a soccer star, often competing with other players at hotels in downtime between matches. But while Ronaldo now has more time to play poker since retiring from professional sports, he has no plans to become a poker pro anytime soon.

Perhaps if Ronaldo had taken his game to the professional level, he could have avoided his loss, and the penalty that came with it. While Nadal collected the prize money, Ronaldo was forced to do some dishwashing, cleaning the plates from the tapas that were eaten by the audience at the event.

Ronaldo was a three-time FIFA World Player of the Year, and twice won the World Cup with Brazil.